What makes the current Full Moon stand out and being so noticeable, astrologically speaking? Number one, it’s the Moon’s “vertical” position placing it at its furthest southwards separation point from the ecliptic plane. Number two, it’s the Full Moon–Sun square to Pluto. This celestial configuration brings the two luminaries in contact with the least visible, the darkest and remote planet.

As the result, the Full Moon feels charged and challenging in hard to explain ways. We can think about the powers of visible challenging the powers of hidden and invisible, often producing an injection of tension and unsettlement into the sphere of feelings and emotions. There isn’t many ways to avoid this irrational exposure, the natural flow of time is the best friend that takes us away from the extremes of the unseen pressure. Further down the page I will talk about the Moon and Pluto energies in some more details.

The one aspect that actually helps is current Venus–Uranus opposition. Polarity between these two celestial gems introduces some tangible relief through aesthetically directed curiosity and novelty. Being spontaneous, creative and artistic is the best way to navigate around this otherwise overly pressurised Full Moon.

In my discussion of the current astrological weather further down the page I will highlight some potentially significant dates being October 21 and 27 followed by the period culminating at November 5 — all directly related to Mars, Pluto and Uranus. We shall see what this period will bring to us individually and the world at large.

Sun–Moon & Gold–Silver: Celestial Dialectic and the Art of Balance 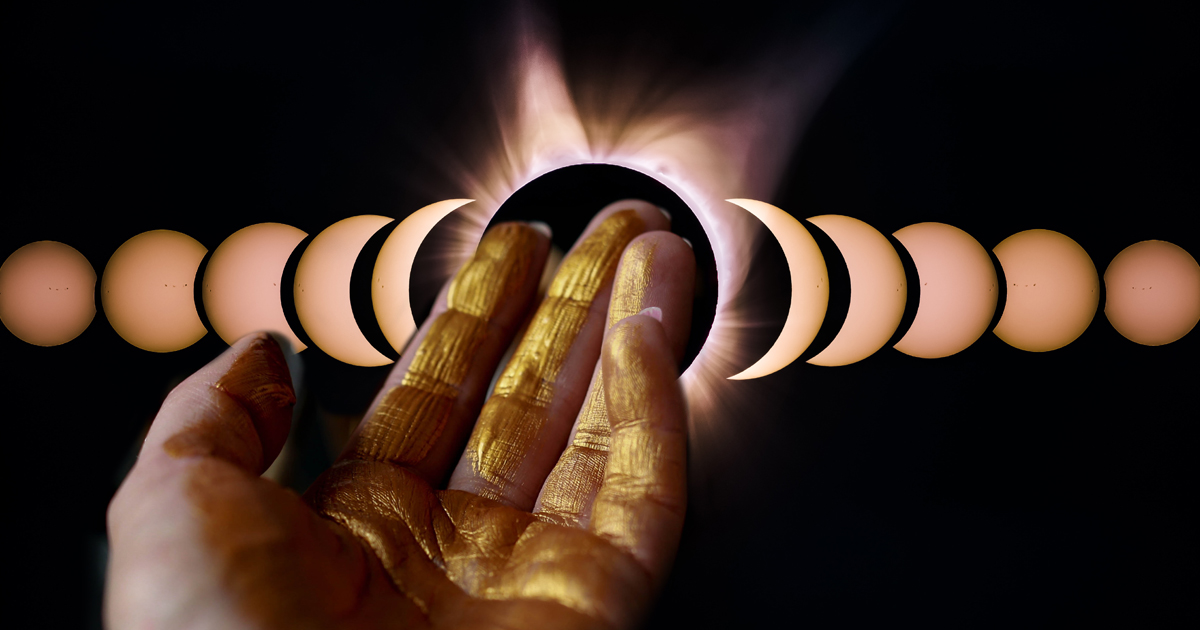 Do we really have to choose?

No, we don’t! We need to learn how to harmonise these polarities in our energetic makeup. It’s essential for our emotional and physical well-being.

And this is where the two major Planetary Metals — Gold and Silver — can share with us their know-how.

From the famous esoteric adage of “As above, so below” we know that certain lofty archetypes manifest themselves in the sky as celestial bodies and on the Earth as metals.

In the physical world Gold is a manifestation of the Sun archetype and Silver represents the Moon.

Life in times of Mars and Uranus

The month of October is influenced by both Uranus and Mars so be prepared for things that unfold in an unconventional and fiery manner.

Uranus will be activated by both the Moon’s square on October 21 shortly after its Last Quarter and by the New Moon on October 27 which takes place at pretty much exact opposition to Uranus with an orb of only one-fifth of a degree — just a hair away!

At this stage Mars will be equally exact square to Saturn and will begin its square aspect with Pluto that will culminate on November 5.

In other words, the second half of October and the first weeks of November come with a warning sign. Don’t “speed” your life, “drive” it carefully keeping awareness of each moment. Mars and Pluto forces are on their high tide marks and, if one is careless, Uranus may easily introduce detonating sparks.

Paradoxically, unexpected difficulties during this period may originate from unresolved fears and inhibitions — and we all have them! Stuff-ups tend to happen when one’s cautious attitude is due to underlying fears as opposed to confident appreciation of the reality and mature respect of personal limits — defined by the “here and now” world and family contexts we inhabit. 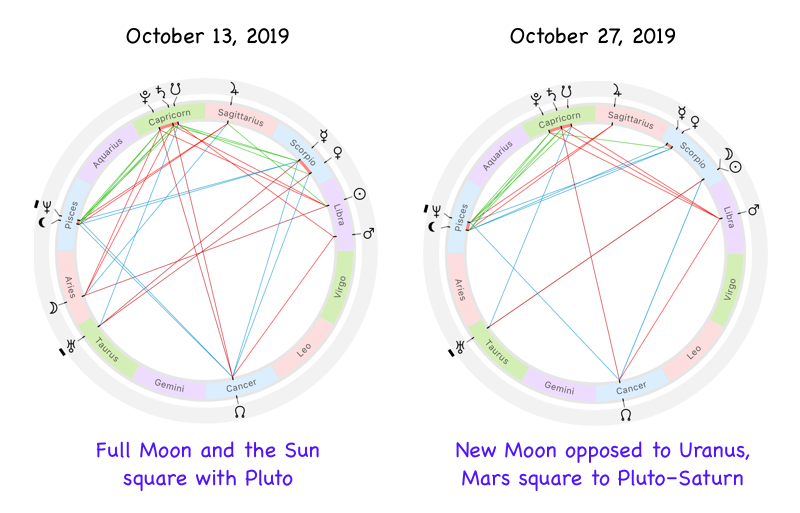 Moon and Pluto — visible and hidden

Anything that Pluto touches often implodes or becomes hidden away from the light of consciousness. Either way we have to deal with the powers governing the unconscious and deep remote principles that influence our destinies as if from the mind-boggling domain of quantum paradoxes.

At the time of the Full Moon, the Moon’s brightest and fullest phase is being directly challenged by the power of absolute blackness. The Moon–Pluto square isn’t just the point of conflict between what’s seen and its invisible subterranean counterpart. It’s a paradoxical tension between the two kinds of fullness.

True to its nature, the Moon’s fullness is fluid and emotional. The fullness of Pluto dwells in the domain of extreme denseness — think the energy stored in Plutonium — where the matter is approaching its peak compression, staying just a hair away from nuclear fission.

While the Moon–Pluto aspects challenge us emotionally, they equally bring out the depths of personality. They connect human emotional landscape with the energies of subterranean forces, resulting in otherwise hidden desires being reflected in waking consciousness. Pluto–Moon people have rich sexuality, they are interested in all things occult and secret, yet they also can be manipulative and display wide swings in their methods and preferences. Pluto-Moon aspects equally bring complications and outbursts of creativity.

Earlier issues covered The Full Moon on Apogee and The New Moon on the Perigee.

Saturn–Pluto conjunction is currently at 6.2º orb with both Saturn and Pluto now firmly direct until the moment of their exact conjunction. The date of the exact conjunction is scheduled for Jan 13, 2020. Read the story about this event that happens once in about 38 years and its possible repercussions.