I think that the New Moon of August 30 is a special and powerful event that ushers us all into a new period of time both on personal level and in the domain of worldly affairs. To be more precise, the Moon by itself isn’t likely to usher us that much but its active combination with other planets bound to produce some tangible influences.

The best thing about this New Moon is that it’s on the perigee meaning the Moon is at the point of its closest distance to the Earth. Both astrologically and astronomically speaking the New Moon means its conjunction with the Sun. Looking at the Sun (don’t) makes one perceive the New Moon’s position in the sky.

What’s more, the Moon on perigee means it is directly opposite the Black Moon point. This adds some “black moon” qualities to already invisible Moon. Symbolically one may speak about the time of tension between the emotional domain and subconscious “shadow” within oneself. This potentially exposes us to certain ideas and desires that were brewing deep inside but haven’t emerged as conscious statements and impulses.

Having all “fast and personal” planets — Mercury, Venus and Mars — conjunct with the Sun signifies a strong astral push highlighting our potential in achieving what we wanted deep inside. That’s obviously provided one knows what they really want in the first place! And that’s the great lesson of the Black Moon: striving towards understanding ourselves at the “shadow” level.

Having the New Moon in Virgo invites for a prudent and responsible attitude, something that diligent Virgos know all too well. In the Astrological Weather section down below I will talk more about a unique combination of forces in the current chart.

Duality that Creates Wholeness – Magic of Receptive and Projective Gemstones 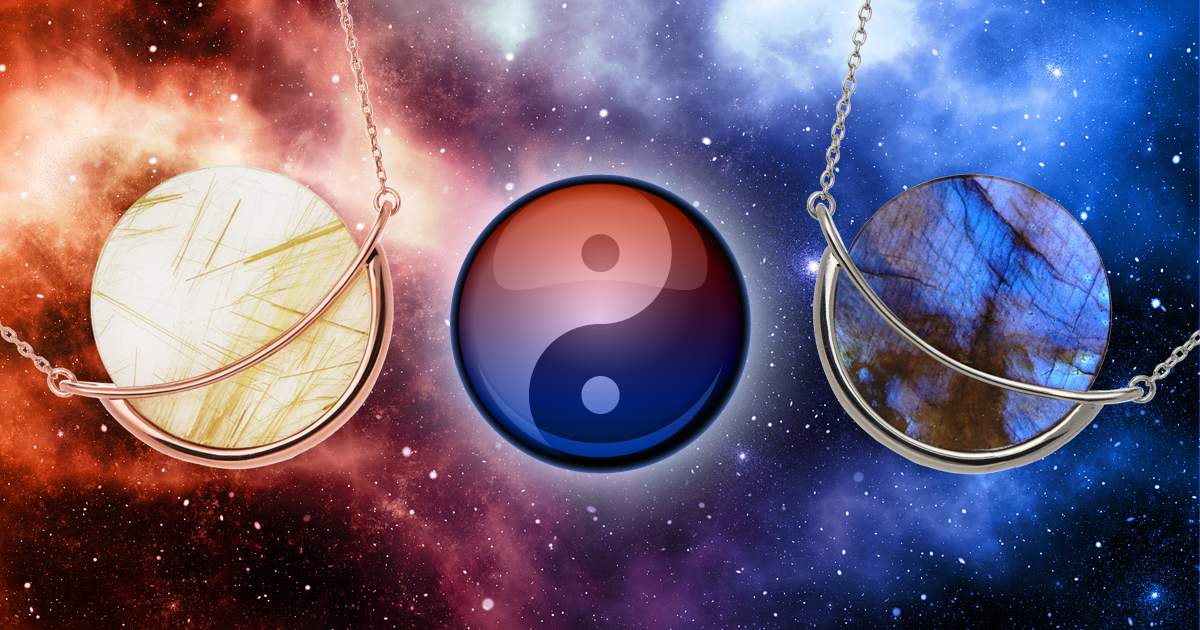 Duality is embedded in the fabric of our universe at the archetypal level. In astrology it is represented by the symbolism of the Sun and the Moon. Chinese philosophy refers to it as Yin and Yang concept of dualism. These two energies are everywhere in the universe – from our planets to our bodies and everything in between.

Push and pull, male and female, day and night, hot and cold, action and retention… Projective and penetrating energy of the Sun and reflective fluidity and nurturing power of the Moon. Each of us have both of them regardless of the gender we belong to. Yes, we need them in different proportions at different times or areas of our lives, but we need both of them in order to feel whole. So they better act in harmony.

If these forces become unbalanced it may negatively affect our spiritual and physical well-being and our ability to actually achieve what we want in our life – career, relationships, health, creativity, you name it…

Current New Moon chart comes with a potent combination of aspects and patterns, it’s well structured and expressive. The main chapters are: 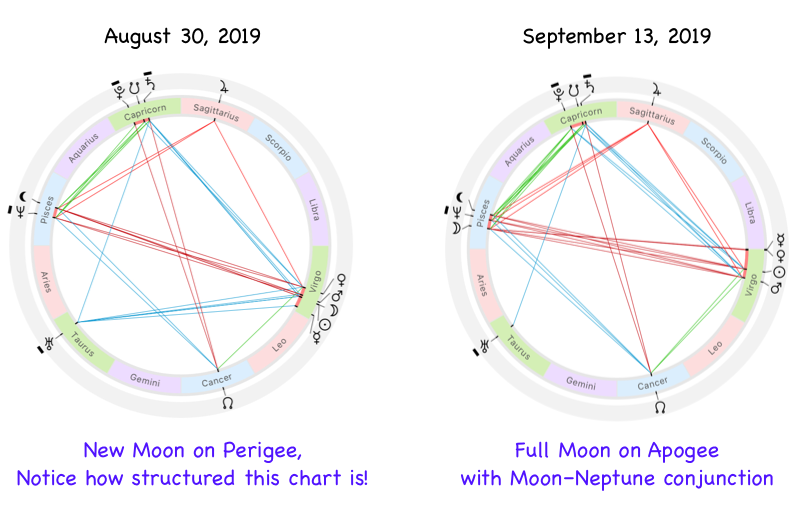 Firstly, as the Black Moon holds the key to this chart I’d like to offer a refresher article on the Black Moon titled “In the “shadow” of the Black Moon”. The Black Moon isn’t necessary easy to grasp but it’s worth knowing some key facts about its existence and influence.

The New Moon cluster that happens in Virgo is opposed by dignified Neptune in its own sign of Pisces. There is a polarity between down-to-earth attitude of Virgo and idealistic nature of Neptune that is influencing our decisions through the Black Moon subconscious connection. This introduces a possibility of self-delusion and the need to assess one’s ideas through Virgo’s practicality and diligence. Especially knowing that now direct Jupiter is also dignified in its own sign of Sagittarius and thus pushing towards expansion and over reaching. Prudence is the key to the new lunar month!

Current chart is noted for its aspect patterns, and if you’re interested to learn more then head over to our story called “Aspect patterns — the building blocks of astrological charts”.

The grand trine is certainly a blessing in this chart. It is composed out of multiple trines between the Sun–Moon–Mercury–Mars–Venus (wow!) cluster, Saturn and Uranus. Trines introduce dynamism and in this case one can speak of Saturn–Uranus influence that is known to be of mostly harmonious nature as the two planets’ energies combine both lofty novelties and precise rigour of planning, that’s when they are in favourable composition. Having retrograde Uranus in fall in Taurus while Saturn is in dignity in Capricorn hints at Saturnian dominance that is reinforced by its conjunction with the South Node and Pluto, both entities grounded in reality and past deeds. Perhaps this may hint at the need to establish new foundations tapping from the results of past efforts and what’s been built over last years if not decades.

The previous issue discussed The “shadow” of the Black Moon.

Saturn–Pluto conjunction is currently separating at 6.7º orb as both Saturn and Pluto are in retrograde until September 18 and October 3 respectively. The date of the exact conjunction is scheduled for Jan 13, 2020. Read the story about this event that happens once in about 38 years and its possible repercussions.