In the previous issue we rightfully suspected that Mars Pluto square of the 2nd February 2019 may bring some serious fire in excess. Well, what can be more fiery than a nuclear missile!

Luckily they are not flying yet but the fuse has been set and ready — the US administration has announced its unilateral withdrawal from the 32 year long treaty of non-proliferation of short- and medium-range nuclear missiles. We don’t normally cover political happenings but this one is an important exception since the world peace is what we all really want.

The featured story below will offer some astrological analysis of this very important event that will certainly find its place in future history books.

Mars – Pluto square of 2019, the breaking moment in the politics of nuclear warfare

All the fiery planets… and not forgetting Eris

If anybody feels extra fiery and challenged there are some very valid reasons for this!

We are currently in the period dominated by a few “hard” planets.

The most notable is Mars that is squeezed between Eris and Uranus. Mars has just completed its exact conjunction with Eris and now moving towards Uranus. It’s always worth remembering that Uranus brings surprises, its effects are always sudden and least expected. So we are bracing ourselves for this from now until the 13th of Feb when Mars will reach exact conjunction with Uranus… 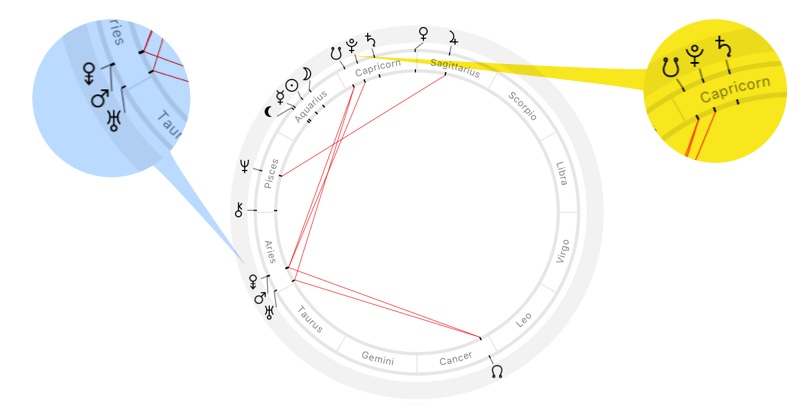 Looking at the chart

The planetary group on the left (highlighted in blue) consists of Eris, Mars and Uranus.

All three planets are in Aries that is the natural dominion of Mars thus significantly reinforcing the volatility.

Mars has just separated from Eris and currently moving towards its conjunction with Uranus that will happen on Feb 13, 6:20 AM UTC.

The planetary group at the top (highlighted in yellow) consists of South Node, Pluto and Saturn.

Both groups are connected by the square aspect that always calls for action.

So we have the three planets of fire square to Pluto, the planet that brings irresistible transformative… fire. This situation is very interesting to observe and see what kind of changes it will bring.

An interesting note about Eris

Eris is a very recent addition to the astrological family of planetary forces. Eris is a female analogue of Pluto and should have been called Persephone (if we follow the mythology) but that name has been already taken by an asteroid so we ended up having Eris.

But don’t forget, Eris represents the qualities and forces of mythological Persephone. Eris has a bigger influence on female charts, it adds an underground flavour to femininity.

After all, read the myth, Persephone went to the Underworlds for a reason!

The previous issue discussed an archetype of love triangle, or why Jupiter and Venus always in love.

Saturn – Pluto conjunction is currently at 6.4º orb is slowly approaching its exact state on Jan 13, 2020. Read the story