Only a few days passed since the vernal Equinox and it certainly feels like the new astrological year is already gearing in. And that is happening way too fast! There are some reasons why this year could be a bit more turbulent, at least emotionally. And this Equinox is certainly not like any other, and here is why…

Symbolically, the Equinox is the time of equilibrium that delineates the boundary between the previous zodiacal year and the beginning of the next unfoldment. The time of the Equinox is somewhat of a cosmic reset when old things have been wrapped up and the new impulse is just about to start unravelling. So it’s a kind of the New Moon moment when things are supposed to get quieter thus allowing for the new beginnings to sprout in a peaceful silence.

On a contrary, this Equinox that took place on March, 20 was closely followed by a Full Moon that peaked a mere 3h45m after the Equinox. The Full Moon was really intense and blasting, quite a few people have commented on that. Scroll down for our regular Astrological Commentary for more details.

The Sidereal Zodiac in astrology, its strengths and weaknesses

The Sidereal Zodiac model is one of the two fundamental astrological systems that divide the celestial sphere into twelve segments, or astrological signs.

What are the strengths and weaknesses of the Sidereal Zodiac and when does it make sense to use the sidereal model instead of the tropical one?… continue reading

Larimar – the Atlantis Stone and its Planetary Energies

If you want to cultivate your intuition and self-awareness, balance your emotions and learn to see things in perspective, seek assistance from Larimar. This gemstone manifests the synergy of two powerful planetary forces: Uranus and Neptune.

Uranus is related to the air element — the power of futuristic vision, innovation and intuition. Neptune rules over the water element and manifests itself through highly idealistic values, artistic inspiration and spiritual devotion.

Larimar is associated with the elements of both air and water and symbolises the harmony between thoughts and emotions, your spirit and your body.

Beautifully represented by the Larimar gemstone, these two energies will guide you through the obstacles of your mind, connect you to your feelings and give you an unlimited access to your intuition.

Larimar projects its incredible calming and soothing effect upon its wearer, it “washes away” everything you need to let go of in order to bring new energy, integrity and true vision into your life.

Larimar is also known as the Atlantis Stone and it is believed that the discovery of this magnificent gemstone was predicted by famous American psychic Edgar Cayce (1877 – 1945), also known as “The Sleeping Prophet”. Learn more about about Larimar lore and history… read more.

Having the Full Moon at the time of the Equinox certainly introduced a dissonant note, a potential “conflict of interests”. It’s akin to a New Moon and a Full Moon happening all at once.

Such a confusing astrological event is very likely to set a tone for the whole of the current zodiacal year until the next Equinox of March 19, 2020.

Here is what I think the next 12 months could bring:

The year has started emotionally charged and literally “too full” to accomodate for the new growth.

On the personal front this can lead to some rushed choices based on overwhelming emotions rather than careful observation and planning before acting. Be aware of this and remember to ask yourself “what if I am just reacting and exploding right now won’t be in my best interest long-term?” Then it could be wise to go for a hike in a forest and enjoy the nature instead!

On the world stage we may see some potential diplomatic hiccups and unexpected discord as the parties will be unable to withdraw from their emotional stance.

The financial markets are often driven by emotions as they are based on an unlikely combination of cold rational thinking and emotional herd-like behaviour. Will be fun to watch the rollercoaster unwind!

The Sun catching up with Chiron 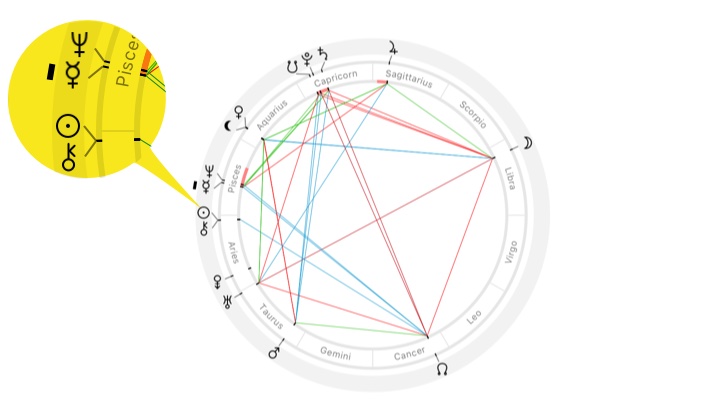 Chiron, the wounded healer, has crossed the Aries cusp four weeks ago on Feb, 17 and now the Sun that has just moved into Aries is on its way to exact conjunction with Chiron due Wednesday, March, 22.

The Sun-Chiron conjunction is likely to bring up some aspects related to deeper personal wounds or certain disabilities that prevent each of us from functioning at 100% of our capacity.

The fire of the Sun can highlight those deficiencies and one may start feeling like “no way, I can’t do that”. On the other hand, that’s all about us accepting our limits. This conjunction can give us the key to unlock the hidden drawer. Before anything can be healed one must see the the wound.

There is a wisdom of saying “okay, I have got something, let’s just hold it and keep moving regardless”. Then the healing energy of the Sun can work its wonders!

On a lighter note, we’re currently having a Mercury-Neptune conjunction that will become exact on March, 24. It’s a wonderful time to explore the wonders of your inner galaxies. For a good story about the Neptunian energies, head over to our recent story “Annual Sun – Neptune conjunction of 2019 — divine magnificence and bottomless delusions” and enjoy deep waters!

The previous issue discussed the timeline of Saturn – Pluto conjunction of years 2019–2020–2021 and its karmic meaning.

The one before looked into the annual Sun – Neptune conjunction of 2019.

Saturn – Pluto conjunction is slowing down and is currently at 3.6º orb as both Saturn and Pluto are preparing for a nearly mutual retrograde in 5 weeks while still approaching their exact conjunction on Jan 13, 2020. Read the story about this event that happens once in about 38 years and its possible repercussions.