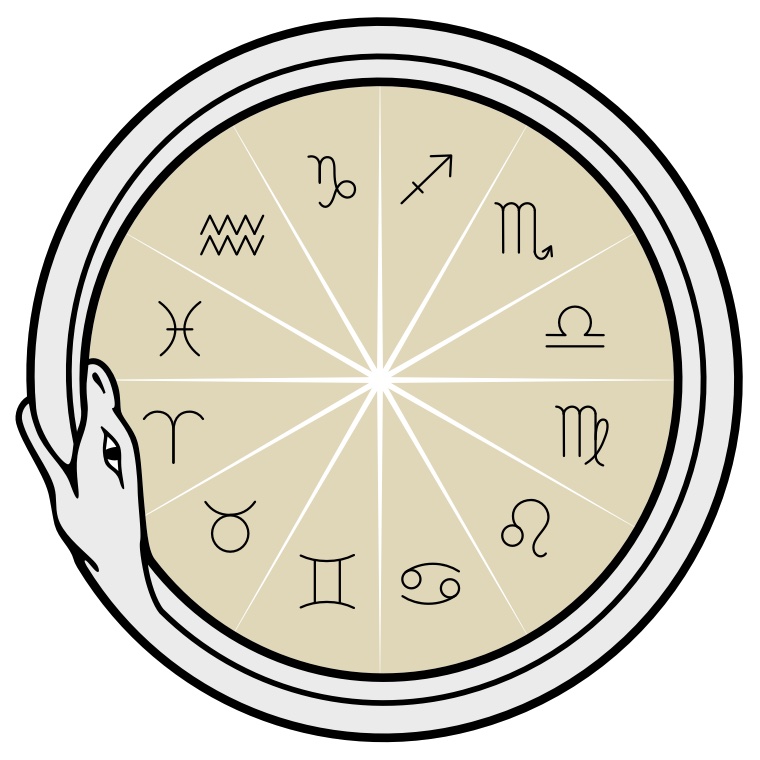 The signs of the Zodiac are not limited to the sky only. Every human body is a miniature replica of the larger cosmos, and the Zodiac signs rulership projects itself onto all major parts of the human anatomy.

The signs of the Zodiac are not limited to the sky only. Every human body is a miniature replica of the larger cosmos, and the Zodiac signs rulership projects itself onto all major parts of the human anatomy.

In previous stories we looked at the phases of the Moon in human life and the seven planets, or the seven ages that constitute a human life. This time we are going to look at our physical bodies and how the signs of the Zodiac can be found in a body of each and every human.

Understanding our bodies as a harmonious combination reflecting the grand celestial order makes us relate to ourselves in a vastly different manner. Perhaps so much needed self-love can sprout from this deeper relationship to ourselves.

It all begins with infinity

Why dragons are so popular? Because they symbolise life in its unlimited state. Snakes relate to dragons and as much as their are often feared and perhaps misunderstood, the snake is also the symbol of eternal vitality.

The most famous snake is Ouroboros. The snake originates from ancient Egypt, the name of the snake is of ancient Greek origin – οὐροβόρος — composed from words οὐρά (oura), meaning “tail” and βορά (bora) meaning “food”. The snake that eats its tail.

Ouroboros is the ultimate symbol of infinity. It has the beginning (the head) but has no end. The head symbolises consciousness and its power of the physical body developed through cycles of reincarnations — the eternal spirit “digests” and transforms its frail and temporal physical body. 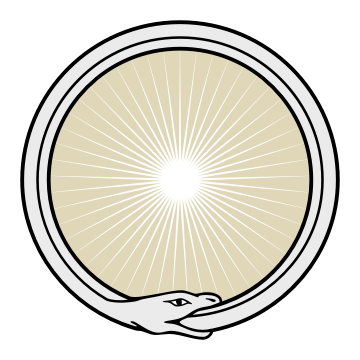 Each of us has that dragon inside, and its discovery can start with the Zodiac wheel.

Where is my Aries?

The head is the primary seat of consciousness. So let’s rotate the Ouroboros snake to match its head with the first sign of the Zodiac, Aries.

Have you noticed that the pictogram of Aries looks not only like ram’s horns but also as facial features, nose and brows? This makes sense, Aries is number one.

Now we can follow the sequence of the Zodiac signs and complete human body, from the head to the toes so that the toes will end up just where the dragon’s mouth is.

The illustration below provides a visual summary of the Zodiac mapped onto human anatomy. 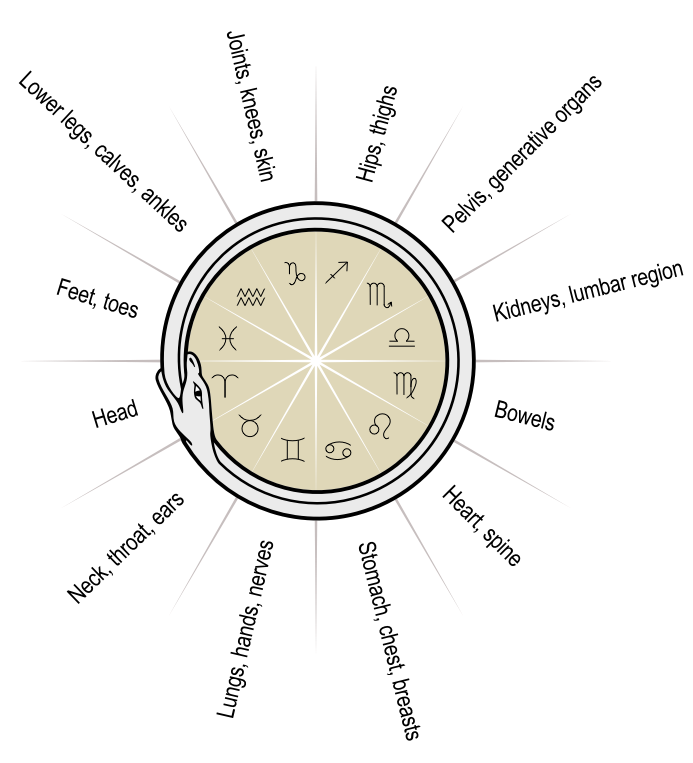 Ⅰ. Aries — the seat of consciousness

It’s worth noting that the nose and nasal bones are actually influenced by Scorpio. The sense of smell is a core function of nature that belongs to the lower chakras.

Taurus rules the neck, throat, ears and larynx. Taurus brings the sense of endurance and support.

Taurus also rules the cerebellum, “the small brain” that is common to all vertebrae animals. Cerebellum helps with motor control and language, receives sensory input from the spine — the functionality that clearly falls under the domain of Taurus.

Gemini rules the lungs, the nerves and the hands, including the arms. Gemini is the principle of air and thus brings flexibility, subtle sensations and governs communication. Gemini excites the nervous system, giving trouble to some people who have strong Gemini influence in their charts.

One may think of Gemini as the symbol for wings. The human anatomy doesn’t have wings but lungs and arms certainly relate to the principle of wings.

Gemini is dealing with bringing oxygen to the lungs.

Cancer rules the stomach, the chest cavity, the breasts. Cancer is the principle of digestion and nurturing. Cancer is prolific in the areas of multiplication and changing the state of substances (the Moon principle) but doesn’t possess a lot of vitality (the Sun principle).

The nurturing functions of Cancer extend to the womb. Cancer is the mothering principle. Cancer also rules over internal mucous surfaces of the body.

Leo rules the core vital energy of an organism, it rules the heart, the spinal column including its marrow and nerves.

Leo represents perhaps the deepest level of energy in a human body. The sign of Leo is the source of vital power and rules over creation and creativity in general.

Virgo rules the bowels. The sign of Virgo is responsible for the processes of absorption, and assimilation.

It’s been well noted that Virgos are usually punctual, picky and look after their hygiene and health in general. Virgo is the principle of selection and utilisation.

Libra rules the kidneys. The sign of Libra is the principle of distillation and filtration.

Libra works on making essences sublime through its action of purification (the Venus principle).

Scorpio rules over the pelvis and generative organs.

The sign of Scorpio is the principle of both procreation and destruction through elimination. Thus majority of excretory functions of the body are ruled by the Scorpio principle (by the way, the nose has that function too).

Sagittarius rules over the hips and thighs and is responsible for the locomotive action.

The sign of Sagittarius governs over the functions of moving the body from one place to another, it’s the transfer agent.

Capricorn rules over the joints, especially the knees’ ones.

Capricorn is ruled by Saturn and thus another important part of human anatomy is ruled by the sign of Capricorn — the skin, especially epidermis that is mostly thus reflecting Saturn’s nature.

Capricorn is the principle of limits and protection of resources.

Aquarius rules over the lower legs, calves and ankles.

Relating to the air element, the sign of Aquarius is the principle of elimination of gases from the body.

Pisces rules over the feet and toes. One may think of the human legs as a tail of the fish, separated into two parts thus presenting the principles of duality and the power of choice between left and right, light or darkness.

The sign of Pisces relates to humid and cold-blooded principles, Pisces act as the force of relaxation and softening of the tissues.

Wrapping it all around

Wrapping the human body around the circle of the Zodiac makes exactly what Ouroboros the snake does — connects the feet with the head, the last sign of the Zodiac, Pisces, with the first sign, Aries.

That is the infinity found within each human body. It also brings the sense of being complete and harmonious, the foundation for self-love that we mentioned in the opening of this story.

How do you know what zodiac is yours

idk if anyone answered your question but whatever your birthday is google it and itll tell you, for example i’m december 20th so i’m a Sagittarius

You have to look up your entire chart and consider the positions of all planets. Discover where the majority of the planets are concentrated in your chart. Sometimes it’s 1 sign, but more often - 2 or 3. And focus on these. Looking up JUST where your sun is (month and day of birth) is a very insignificant purveyor of information by itself.

Reply to thread started by Gulwant