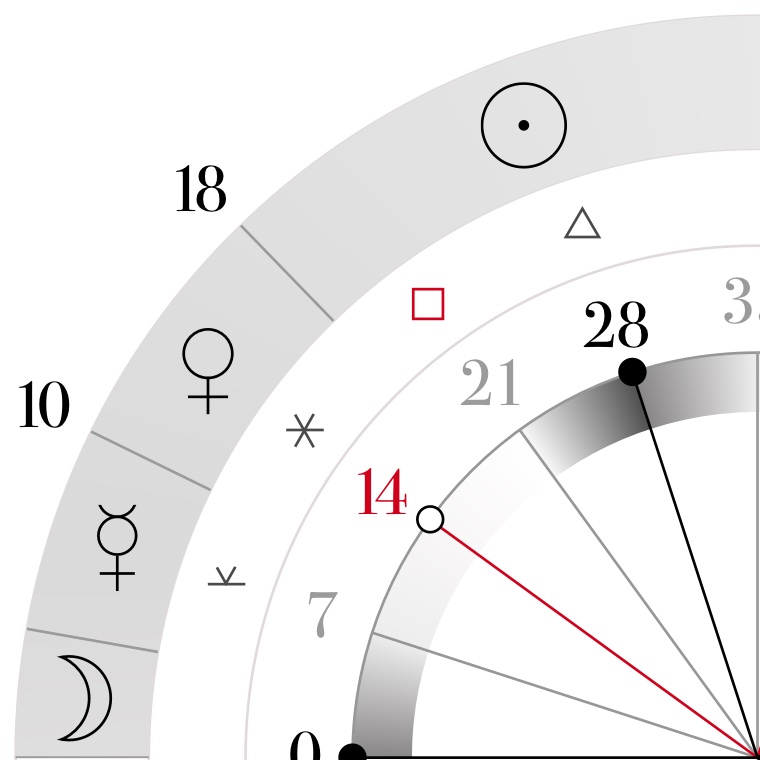 The low efficiency of the New Year’s resolutions approach is due to the resolutions often being a mental construct that ignores the bigger dynamical system that is called “your life”.

A simple answer to the second question as to why “New Year’s resolutions” is a bad idea — “improving” the year ahead rarely works because that single year is taken out of the bigger context of the unfoldment of life. Infamous low efficiency of the New Year’s resolutions approach is due to the resolutions often being a mental construct that ignores the bigger dynamical system that is called “your life”.

Seeing your life as an unfoldment of phases squarely puts your choices and actions in the context of planetary forces and cosmic principles that are acting at the current moment. It’s like surfing an ocean wave: no matter what we imagine, we can’t really surf until there is a real wave moving in the right direction.

The phases of the Moon and their influence on human life

There are numerous ways to divide the duration of human life into meaningful periods that make sense from the astrological standpoint. One of the methods called “planetary periods” has been looked at in the previous story “The Seven Ages of man”.

The current story will look into how the principles behind the phases of the Moon apply themselves to whole periods of human life. As an extra, we will also add Uranus, a rather surprising addition to the Moon’s phases. The story will culminate with a printable map of life that helps with seeing a bigger picture — your bigger picture.

The days of our years are threescore years and ten;
and if by reason of strength they be fourscore years,
yet is their strength labor and sorrow;
for it is soon cut off, and we fly away.

And of course, the immortal Shakespeare’s words:

Threescore and ten I can remember well…

From historical and statistical perspectives, a 70-year life span is certainly closer to the average. And it’s a nice number since it includes the magical number 7. Here is a refresher as to why the number seven is so interesting. 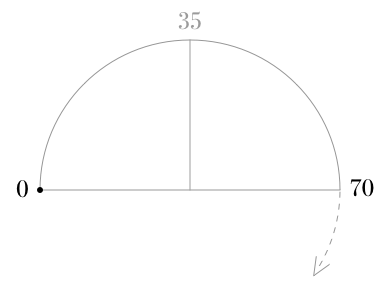 Suppose we decided to use 70 years of human life and draw it as a half circle, or an arc of 180º. The zero on the left marks the moment of birth, the number 35 marks the middle of life and the 70th year mark is positioned at 180 degrees. The life doesn’t stop at 70, it keeps going.

The Moon phases and a progressed chart

A progressed chart is a “preview” of how native’s life could unfold through the years to come. The idea behind the astrological technique of progressed chart also comes from the Bible, that says:

I have appointed thee each day for a year.

The progressed chart technique called “primary directions” looks at the astrological charts of the first days of life. Time Nomad app makes it easy to work with progressed charts.

Back to the Moon… 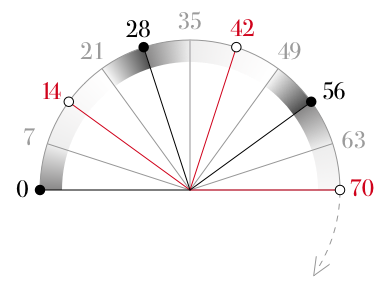 The illustration shows that:

This makes sense. For example, a child starts studying at around 7 years old, at 14 years old the child is reaching full intensity of their school years, culminating at around the 21-24 year when full education cycle has been completed and the young professional is ready for working life.

The second period of professional maturation, career building or establishing a family takes place during years 28 – 42 and the “reaping of the harvest” phase starts at about 51 year of age.

The third phase begins at about 58 year mark. It comes with the idea of a free choice of what and how to spend it. The duties have been hopefully done and the native is free to follow the calling of their heart in whatever form it comes.

Uranus as an agent for change

Movement of Uranus coincides with the changes of the phases of the Moon at the scale of human life.

Every 7th year transiting Uranus makes the following aspect to the natal Uranus:

Uranus is an agent for change and the words “sudden” and “surprise” describe it really well. By coinciding with the phases of the Moon, Uranus brings about required push to ensure that the person moves along their time line. Uranus can come with an electric kind of shock and even challenge health. Those Uranian transits are something to be aware of and keeping one’s life moving certainly helps to minimise Uranian kicks in the soft place. 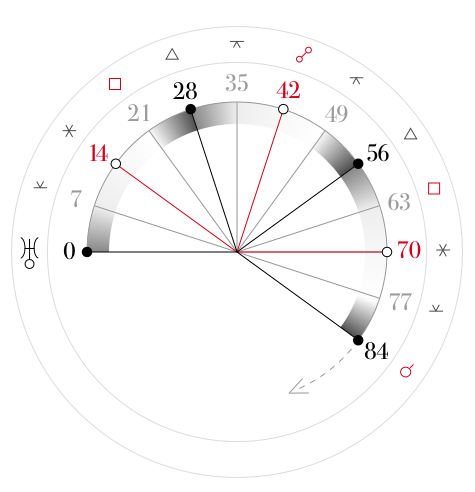 The illustration above adds Uranian transits to the phases of the Moon mapped along the average span of a human life. And since we’re living in the 21st century, let’s extend the average life expectancy to 84 years!

The addition of the Uranian transits makes a few important years stand out:

The 21st year of life

Uranus square coincides with the last quarter of the moon. This calls for the action of incarnation supported by the phase of “reaping the harvest” of previous years devoted to studying the world.

The 42nd year of life

Uranus opposition brings polarity that arrives at the fullest of the Moon. The high tension of the full Moon reinforced by the Uranian polarity makes a loud call to action.

The 63rd year of life

Transiting Uranus is square to natal for the second time, it starts the next phase of life this time expressed through the energies of the first quarter of the Moon with its symbolism of organic development and revitalisation. Those are the years of reinventing the life style and setting longer terms goals based on the learnings acquired in previous decades — 63 is the new 7 but with more wisdom and practical skills.

What about the planetary spheres?

For the sake of a more complete picture, we can add one more layer of planetary spheres that was discussed in the previous story, “The Seven Ages of man”

Thus the course of human life can be viewed as combination of the three layers of cosmic principles (that’s not to say there are no other principles, there are certainly many more of them):

The diagram below attempts to create a lookup guide at the development of one’s life through years and cycles. 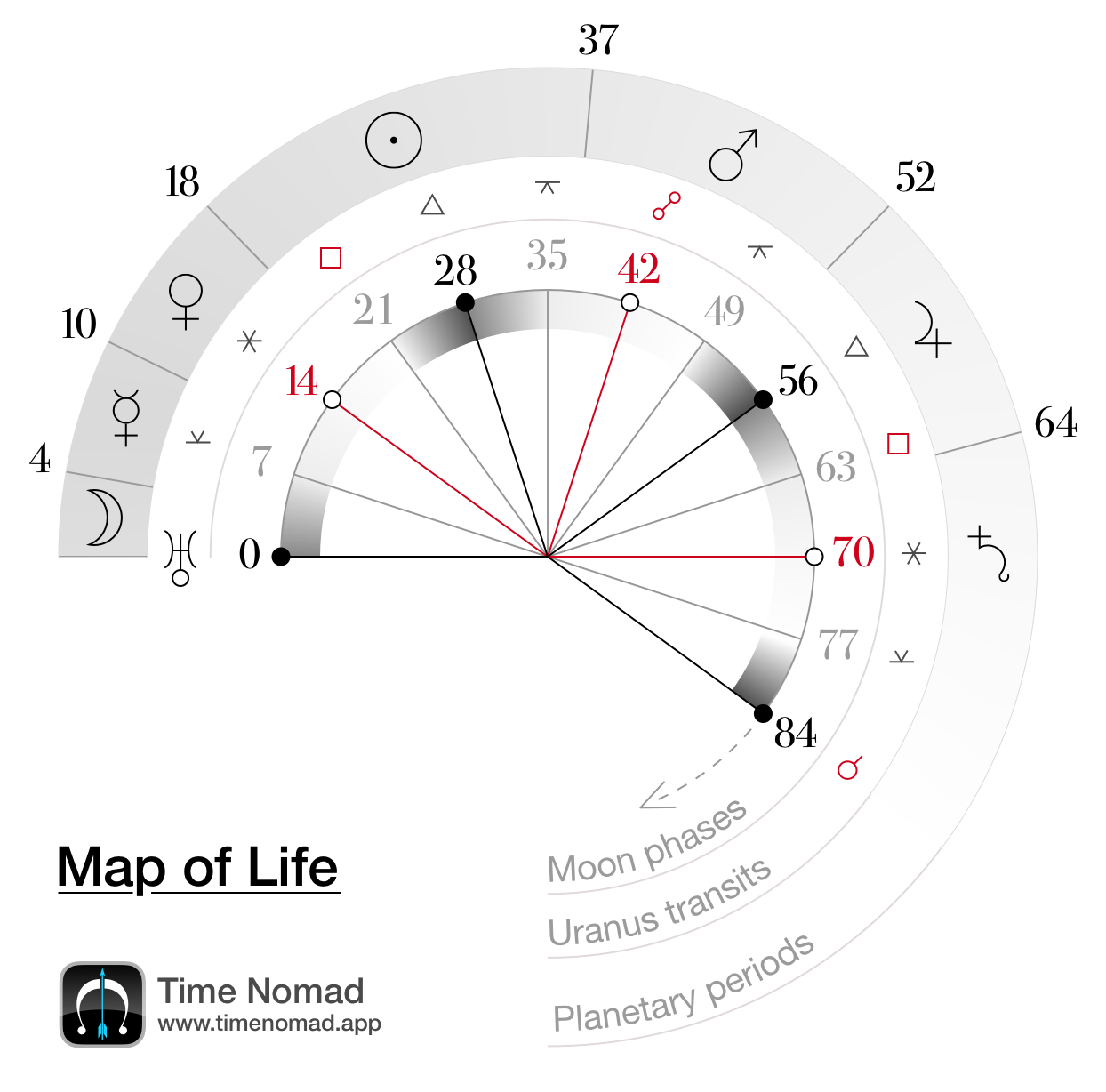 In its entirety, the “Map of Life” diagram may look somewhat intimidating. We hope that this story allows for an easier understanding how so many principles work together towards forming a bigger picture. The reader is welcome to print it and pin it to the wall. The map will help to see where you are and how your life is unfolding in the context of the whole life, thus escaping the uninspiring chores of the New Year’s resolutions.

What about Saturn returns?

We consciously excluded Saturn returns not to overcomplicate an already complex picture. Saturn returns take place at approximate ages of 27–31, 56–60 and 84–90 with the exact year depending on each individual chart.

Seeing life as a dynamic system

Many clients of astrology ask a typical question of “when this or that will happen to me?” Instead of coming up with numbers and predictions, an experienced astrologer strives to see the unfoldment of one’s life as a dynamic flow of ebbs, tides and personal choices and resulting actions. Life events don’t pop out of blue simply because numbers say so, meaningful life events are consequences of actions taken in prior years.