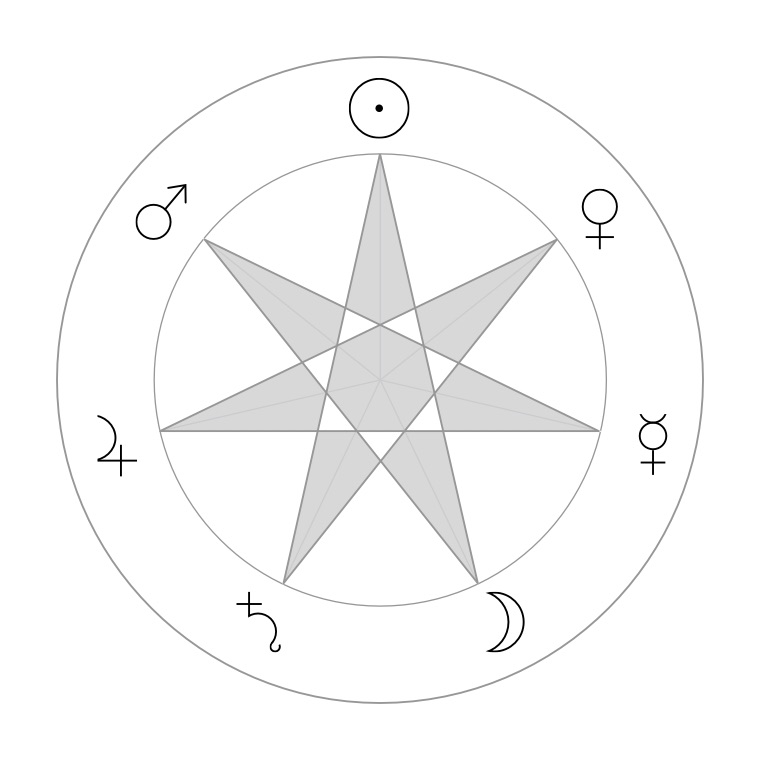 The order of planetary hours and therefore the days of the week can be further explored in the context of sacred geometry with some elements of numerology and an introduction of heptagrams.

Continuing mini-series on the topic of planetary hours in the context of astrology. This is the third part of the story. The reader is invited to review the first part and the second part as they provide a necessary foundation for this article.

Numerology of a circle

Looking further into the numerological symbolism of the number seven that represents both seven classical planets and seven planetary spheres, one could experiment with a circle which is the simplest symbol of infinity of space and time.

Firstly, looking at the number 360° degrees that constitute the circle: it is a product of a very simple — yet equally elegant — mathematical multiplication:

Dividing the circle into seven equal parts produces seven sectors of 51.4285714286…° degrees each. There are actually a few more elegant ways to express this number: 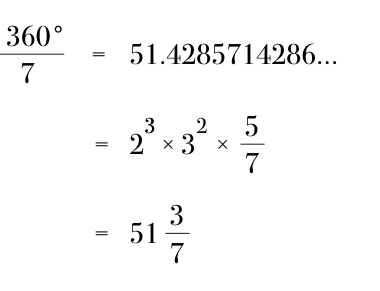 What is becoming interesting is that the operation of division of a circle by number seven introduces number five which deeply relates to all things that are considered belonging to the domain of magic, alchemy and astral powers in general.

Conversely, dividing the circle into five sectors produces number 72°, again highlighting the linkage between numbers 5 and 7. 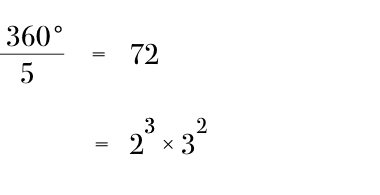 Pondering upon these equations from the numerological perspective, one may say, “astral energy is a function of time”, and vice versa.

Circle divided by seven and the heptagram

Moving back to dividing the circle, this is what one gets — a circle divided into seven equal parts. 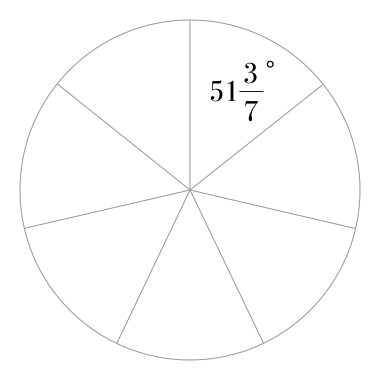 This introduces an opportunity to bridge numerology and sacred geometry.

Using the sequence of planetary hours and placing the ruling principle, the Sun, at the top — or another way to think of this point as the midheaven of an astrological chart — and distributing the rest of the planets, the following diagram is emerging: 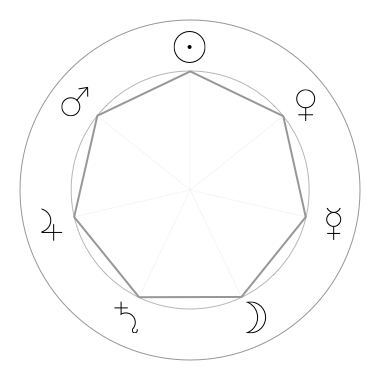 The polygon above is constructed by connecting the points according to the order of planetary hours. The other way to connect the points is by using the order of the days of the week:

By doing so, a polygon called “regular heptagram” is emerging: 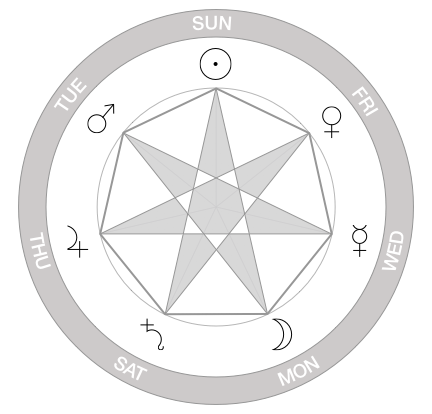 This diagram is called a heptagram because “hepta” means “seven” in Greek and “gram” means line. Heptagram is a star-like polygon made of seven intersecting lines.

“The heptagram” is an alternative construction of a star-like object. Instead of connecting every third point, as it was done to produce the regular heptagram, one needs to connect every second point, producing the symbol historically carrying the meaning of perfection of God: 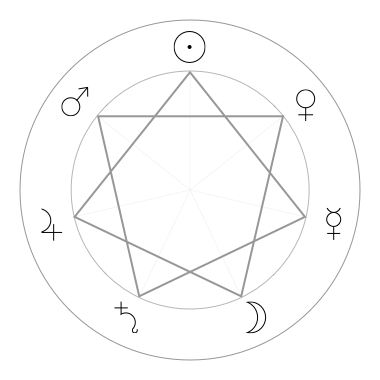 In this case the order of the planets produces the second possible way to distribute dialectical pairs of planetary forces: Mars & Venus, Saturn & the Moon, Mercury & Jupiter. 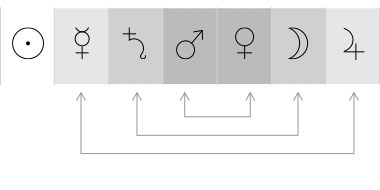 The first order of distribution has been shown in the another part of this article.

Following each connecting line, one can notice that the heptagram consists of pairs of planetary forces of either harmonious polarity or expressing dialectical opposition of qualities.

The table below illustrates another dimension of the heptagram — the ebb and flow principle where planetary energies manifest themselves through alternating phases of compression or expansion, each phase consisting of several pairs of planets. The process is certainly neither random nor chaotic, it actually makes a lot of sense.

“The heptagram” is a well-known symbol used for centuries in many religious contexts, notably Christianity, Islam, metaphysical, occult and magical disciplines.

At a slightly rotated angle the heptagram becomes a familiar powerful symbol of dynamism of infinity imbued with endless perfection — sacred geometry indeed. 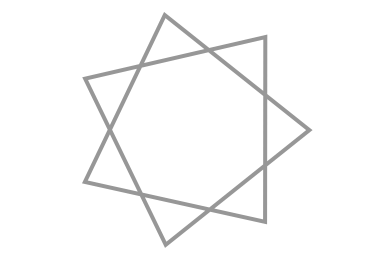 What is the difference between those two heptagrams? The difference is in the order of flow of the planetary energies:

“The heptagram” — with its points connected according to the dialectic between planetary forces — symbolises the flow of energy through harmonious or contrasting planetary pairs. In other words, the “how to” aspect of a creative process such unfoldment of an individual human life, a DNA-like process of unpacking an endless double-helix spiral. 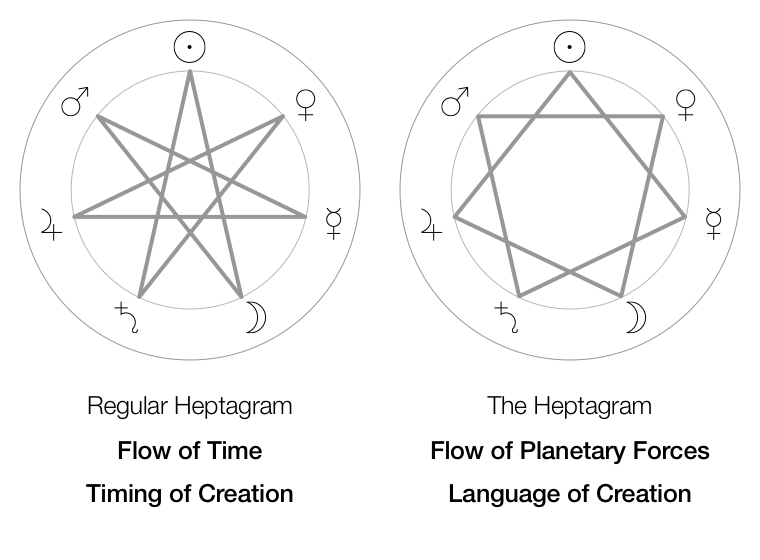 Truly, a lot of meaning packed in these ancient symbols.

Wrapping up the topic of Planetary Hours

Knowledge of planetary hours adds a new dimension to the interpretation of astrological charts. Planetary hours are also extremely important for anybody who practices magic, does rituals or deals with any kind of natural forces. Choosing right timing makes practices successful, and vice versa.

And… we are not done with the heptagrams yet! The next story covers the topic of irregular heptagrams what they possibly mean and how to make some sort of sense out of them when interpreting astrological charts. 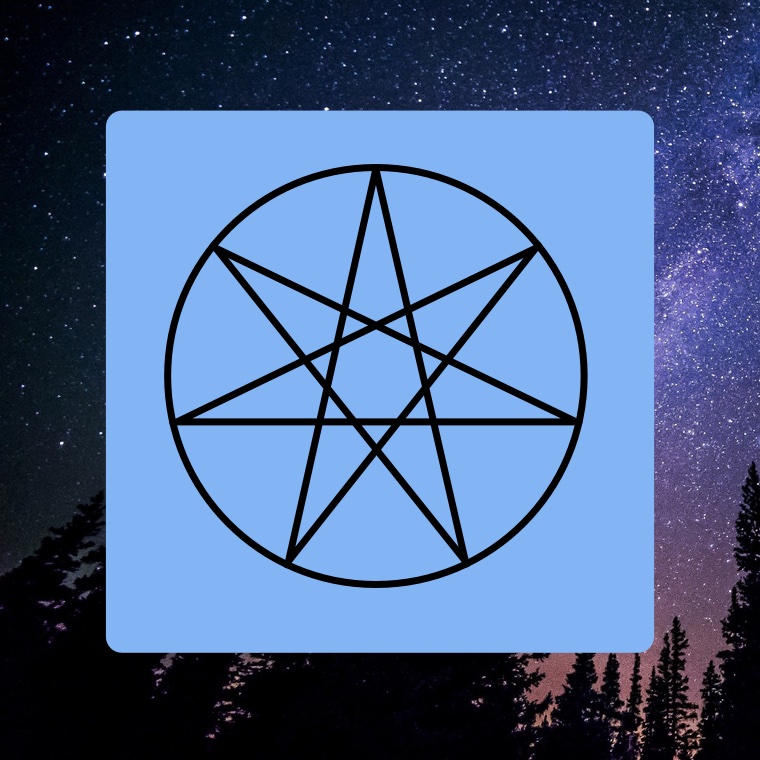 I have to ask you something. I miss the connection between the planet hours and the numbers (Kabala) which are more active at the planetary hours. Are you familiar with that area? If so, I would be interested to know on what basis you calculate these numbers. There are different methods, such as taking only the number of the current hour or adding the number of hours to the number of the day…

I don’t consider myself as being sufficiently familiar with Kabbalah so take my answer with a grain of salt. The article approaches the planetary hours from the standpoint of the Western esoteric tradition which mostly focuses on symbolic and cosmological meaning of the planets and planetary spheres.

The numbers are assigned accordingly to the speed of movement of celestial bodies, with the Moon being number 1, the fastest.

Yet for other applications, one may consider a different numbering, for example the Sun is 1, the Moon is 2, etc.

This illustrates the idea of being “symbolic” – the symbol often depends on context: do you look from the Earth perspective, from the cosmic perspective, from day/night, from a day of the week, season, etc… many of ways to interpret things.

Hebrew alphabet is perhaps the only system that equates letters with numbers, there’s no separate numerical alphabet in Hebrew. So one can easily translate any word into a corresponding number using Gematria: the Sun will be 330, the Moon is 170, etc.

Interestingly enough in English Gematria the Sun in 324, the Moon is 342.

It’s easy to see that there are infinitely many ways to play with the numbers, especially the large ones. Is there any magical meaning or application? Some say yes, others disagree. Those who gain a significant insight might want to keep that knowledge hidden due to the nature of public knowledge that dissolves “the edge” or competitive advantage.

This isn’t a direct answer to your question, yet I am hoping it’ll shed some light for others who might be curious to learn more about different approaches.

Reply to thread started by my

Truly appreciate the thoroughness of this series. There is a lot of depth that you have illustrated from fact and fiction to help us understand this create 1-7 cycle.

Now my question.. You’ve explained why Wednesday comes after Tuesday but why should #TODAY# be named a Tuesday? In other words, when is the starting point for this cycle? I would guess that the answer would follow the same reference point as Tropical Astrology, starting at the Spring equinox

Why is some calendar day called Tuesday and not any other day… Here’s my understanding. And I am very curious about other interpretations!

The week cycle is a fundamental principle of division of time. It’s a rhythm of succession of planetary energies that coalesce in an even larger infinitely more complex flow of time. The flow of time is something that we can only aspire to understand from the standpoint of physics. What is certain is that time is a hyper dimensional phenomenon, meaning it flows at many planes at once and thus is fiendishly difficult to grasp by an ordinary human mind.

The ancients (it believed around the times of Babylon) have received an inspiration or revelation about some aspects of the time process and the symbolic relationship of the number 7 to the phenomenon of time. Thus the 7 day week was born.

Perceiving the 7 day period as a measure of rhythm allows us to get in sync with certain aspects of the flow in more harmonious ways. Yet we will never be able to sync up with the totality of it, meaning the whole cosmos. Thus having the 7 day cycle consisting of qualitatively different phases (days) of action and rest is the most harmonious way to move through time. From this standpoint it doesn’t really matter which day is the true “first” or “second” — following the principle is more important than fixing things once and forever.

That also makes sense from the hyper dimensional nature of time. We are simply picking one of many “slices” of that flow. And when billions of people doing that in unison for hundreds of years, that creates a tangible reality of the calendar and its weeks.

So, yes, I do believe any day could be Tuesday!

Thank you for this fascinating class…..and made me think of the significance of the number 7 and the 7 pointed star. The 51.4285…degrees of the 7 points of the star within a circle reminds me of the very intentional angle of slope of the great pyramid which contains other measurements related to the earth. Something to ponder about their choice of this number. I do think the pyramids created fixed points in the sky which made it easier to see the perceived movements of the stars above. The Lakotas also thought of their tipis as funnels for the star energies up above, so the pyramid shape seemed to enhance the star energies for many peoples on earth. You might like the book on Lakota Star knowledge