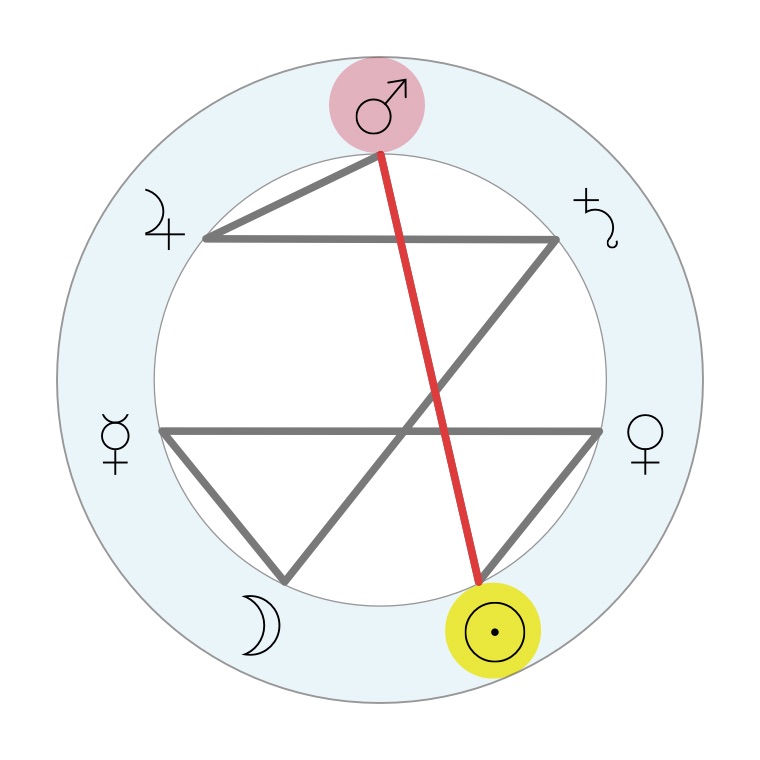 When it comes to finding a dominant planet of a chart, heptagrams, that emerged from the sequence of the planetary hours, provide practicing astrologers with additional insights into the balance of planetary configuration of a natal chart.

This essay was created as an extension to the mini-series about the planetary hours. You are welcome to revisit part one, two and three of the series, they provide important foundational material on the origins of heptagrams.

Why dominant planet is so important?

An astrological chart is a snapshot of a moment in time, and it makes sense to answer the question: what planet is the most active at that specific moment?

Even though every chart is a pretty much a fluid cocktail of a bunch of planetary forces, not all planets manifest their forces at their full strength and potential. Some planets could be weakened, for example, by residing in houses not connected to their natural dominion, other planets will gain an extra strength through favourable position and supporting aspects.

Finding a dominant planets helps to unpack the meaning of a chart. Dominant planet acts as an entry point to the interpretation of the chart — it projects its essential qualities onto other less strong planets and add its specific hues to their manifestation.

For example, if Mars and Saturn form some aspect, which one will influence another? Will the person’s traits be closer to being overly cautios and avoiding actions vs. a successful strategist and tactician? Those are two rather opposite psychological profiles. It would be very helpful to find a way to tell which one is more likely to prevail.

Heptagrams provide solid clues as to which planet manifests itself in a stronger fashion.

What is a heptagram?

Heptagrams appear if one equally distributes the seven classical planets around a circle and connects them with lines in a particular way. 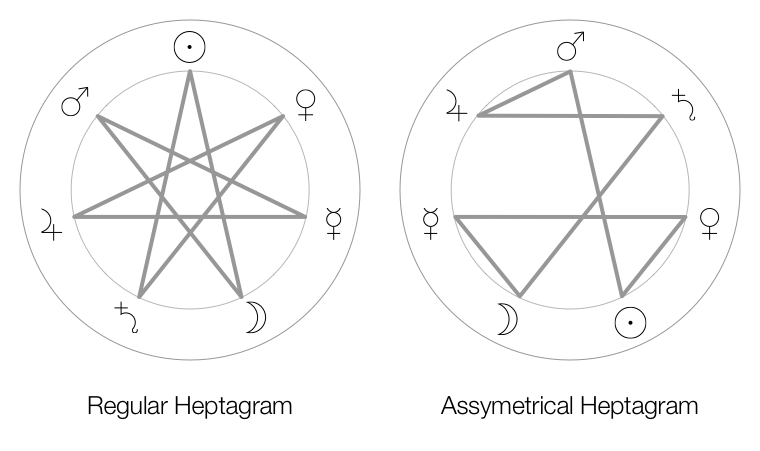 Geometrically speaking, a heptagram is a polygon made out of seven points — “hepta” means “seven” in Greek and “gram” means line.

Some heptagrams take on a star-like shapes, others look more like abstract figures. The animation below shows the dynamic nature of heptagrams made out of planetary hours.

From our knowledge, and please voice your corrections, heptagrams were discovered by French astrologer Don Néroman (1884 - 1953).

By the way, Don is also responsible for the introduction of the Black Moon (often referred to as Lilith) into the modern astrological dictionary. The Black Moon does reflect some aspects of mythological Lilith but it’s way more than that! Unfortunately Don’s original naming of the Black Moon has been simplified by later astrologers who tend to call it Lilith thus making it hard to discern between the Black Moon and the physical asteroid Lilith.

The order of planetary spheres produced the measurement of time, which is based on the numbers 3 and 4:

And the 7 days of the week that were named after planetary hours and follow their own order:

Summing all this, one may intuit that heptagrams deal with the flavour of time at the moment described by an astrological chart. Since astrology is all about timing, heptagrams do give us a snapshot of what kind of cosmic configuration has been happening at that moment.

Heptagrams are rather easily produced from any astrological chart. Here is how is works, and don’t forget to only work with the seven classical planets visible by the naked eye:

This means that every chart produces two heptagrams:

Faster moving planets like the Moon, Mercury, Venus and the Sun is what makes heptagrams change and look different. The Moon, being the fastest planet travelling about 13.18° per day, is the primary driver of the change. For comparison, the second fastest planet Mercury travels 1.57° per day.

Time Nomad makes it easy to work with planetary hours and build heptagrams for any chart.

When carefully observed, heptagrams evoke an unmistakable feeling of sacred geometry involved in them. Heptagrams come in a variety of shapes and each of those shapes leaves a specific impression on the viewer.

For each planetary configuration there are always two heptagrams — one when planets connected using the sequence of the days of the week, and another made by following the order of planetary spheres.

Some take symmetrical shapes and look really awesome, others are asymmetrical and still equally fascinating. The two illustrations below show the both types of heptagrams. Reload the page to get more random shapes.

There has to be a deep meaning behind this fascinating geometrical music that mostly certainly looks alive and imbued with specific magical meaning. Sacred geometry in action indeed.

Here are some basic rules as to what can be told by looking at a heptagram, particularly identifying a dominant planet that has a stronger influence on the chart:

There is certainly more than that as heptagrams seem to have a symbolic language of their own.

Take a few astrological charts and analyse their heptagrams, notice how heptagrams add another meaningful dimension to the chart interpretation. There is a lot to discover using this simple yet powerful technique.

Looked at my natal chart, and looked at may partner’s chart. One of us has a nicely looking symmetrical hectogram. Another has very broken one. Which one is better?

I think asymmetrical heptagrams aren’t bad, they highlight a different composition of astral energies. Asymmetricals often more jazzier so to speak. Plus it’s not like “mine” or “theirs” heptagram. Heptagram shows a cosmic configuration that perhaps influenced a balance of personal chart but it’s not a personal thing.