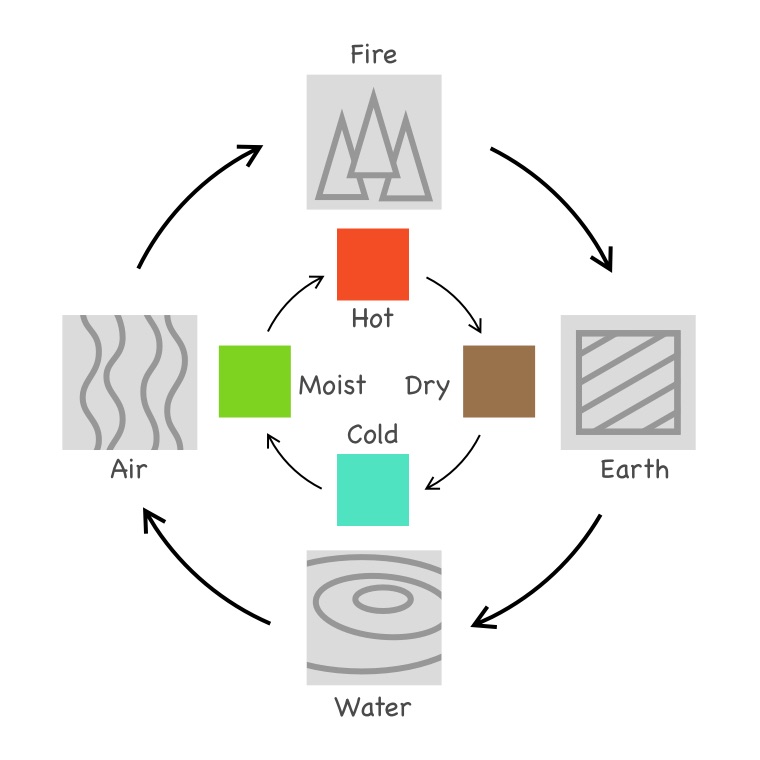 Everything spins – from galaxies and stars to human lives – producing large and small cycles of events.

Spinning (or rotation) is the fundamental and archetypal movement within the creation. God must had said “let there be spin” at the day zero of initiation of the present cosmic cycle. Cosmic objects like galaxies, stars and planets as well as human lives — all seem to had been created as spinning cyclical entitites.

Personal life and its events are often better understood when looked from the cyclical perspective. But first it makes sense to ponder upon the cycles of celestial bodies and other related phenomena.

A cycle is made of powers

Some cycles are pretty much obvious and clearly delineated: day and night, seasons, phases of the Moon, birth and death, etc. — they all have some kind of beginning and end.

Then there a more fluid types of cycles, especially in the domain of personal development that don’t start or end in a clear cut manner.

How can one describe that flavour of personal journey at a given time?

One way is to remember the Four Elements (also called the Essences) and their powers (or Qualities):

Read more about the elements in the previous post “The four Elements and their powers”.

The elements/essences are locally corrupted by each other, but the powers/qualities are neither corrupted nor generated, they are incorporeal. Qualities are extremely useful to describe the state of a system — from astrological configuration to human psyche and bodily health at a particular point in time.

It’s worth noting that the Chinese system of Five Elements or Wu Xing is somewhat similar to the western elements and their powers yet it is vastly different at the same time. Always good to keep in mind that what the Chinese call, for example, “wood” isn’t a material of wood, but rather a movement representing qualities of time or season.

Seeing the qualities as movements allows to describe a dynamic cycle of powers: 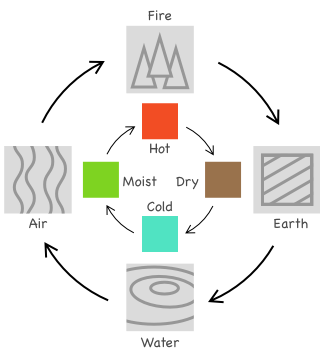 Below are some well-known cycles that are worth to keep in mind.

The cycle of seasons

Spring starts with the vernal equinox and brings mostly moisture, as the cold of winter is being dissipated and waters arrive.

Summer is marked by the influence of the Sun as it approaches the highest position in the sky and bringing heat.

Autumn is the result of the heat that absorbed the moisture, therefore autumn has the power of dryness.

In winter the Sun reaches its lowest point in the sky. It’s the power of cold.

The cycle within astrological chart

The four angles of the chart (or cardinal points) — Ascendant, Midheaven, Descendant and Imum Coeli — also follow the same dynamism of powers. The angles reflect the day/night cycle of sunrise, starting from the ascendant as the moment of sunrise. 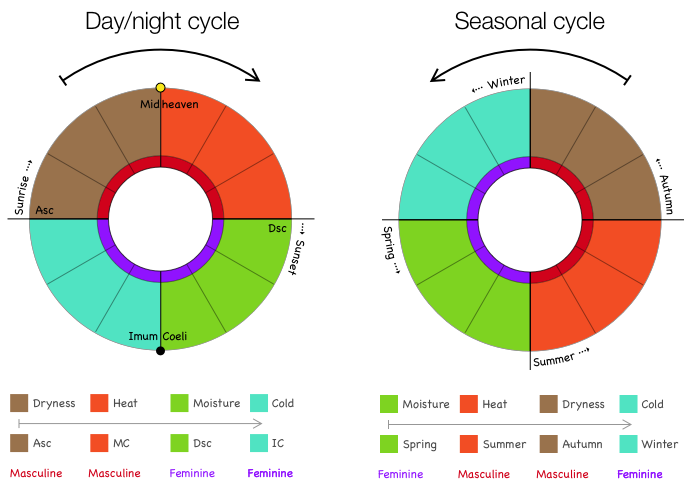 Human body and personal life are literally made out of numerous cycles. Just realising that allows for a much better navigation through one’s life circumstances. As much as certain events could be emotionally frustrating, they often mark the churning of phases of some cycle and seeing them like that allows for a smoother transition.

At least two types of cycles can be easily identified:

Those “natural” cycles are run outside of our normal consciousness, they are subtle and require a certain level of training to meaningfully deal with.

Each personal development cycle presents an opportunity to “step up” in a personal process. A person goes through experiences and either learns the lessons and thus progresses or is bound for a rinse and repeat.

The notion of cycles presents an incredibly useful model of perceiving one’s life as a constant process based on development and enhancement — some lives run in circles, while others spiral upwards.

Saturn return is a classical example of a large cycle of about 27 years. Its symbolism rests on the notion of time that passed and lessons learned. It is both karmic and structuring.

One can analyse a number of personal cycles based of planetary returns:

The trans-Saturnian planets are too slow and don’t make much sense for the span of human life.

The astrological chart is circular for many reasons. There is a power and truth in its spinning motion. Just like galaxies, stars and planets, human destinies are bound to evolvement through spinning motion.

What does the star symbol mean in the summary chart?

Hey friend, is it possible to add a feature to place an image under the chart that rotates with the Zodiac. this would be a great help. Thanks.

Hey Claudio, let me think about that. Will add it to my thinking list.

Reply to thread started by Claudio

Thanks, with all that is coming to light, it will make you app so much more wanted. Cheers!

Hi, can you please add house ingress notifications and to summary? That would be very much appreciated!

There is a problem – there will be a lot house ingresses! Each planet will ingress into 12 houses, we are looking at something like ~120 notifications per day, at least. This amount isn’t allowed by iOS that only allows up to 64 notifications. Let me think about this. Perhaps I could add an ingress table somewhere.

Thanks for the reply!

Maybe have a list of planets to enable notifications? For example, only notify when the Sun or Pluto changes natal house. That would be ideal.

Having a list of house ingress dates for all the planets would be awesome!

Reply to thread started by Pavel

I’m fascinated by the way planetary returns correspond with typical milestones. Eg Mars return corresponds with the “terrible twos” phase that is characterised by fits of rage, temper tantrums etc. Jupiter returns correspond with the maturity and growth that comes around age 12 due to puberty, whilst still maintaining a “youthful” joy (unlike the maturity Saturn expects from us during its return around age 29)