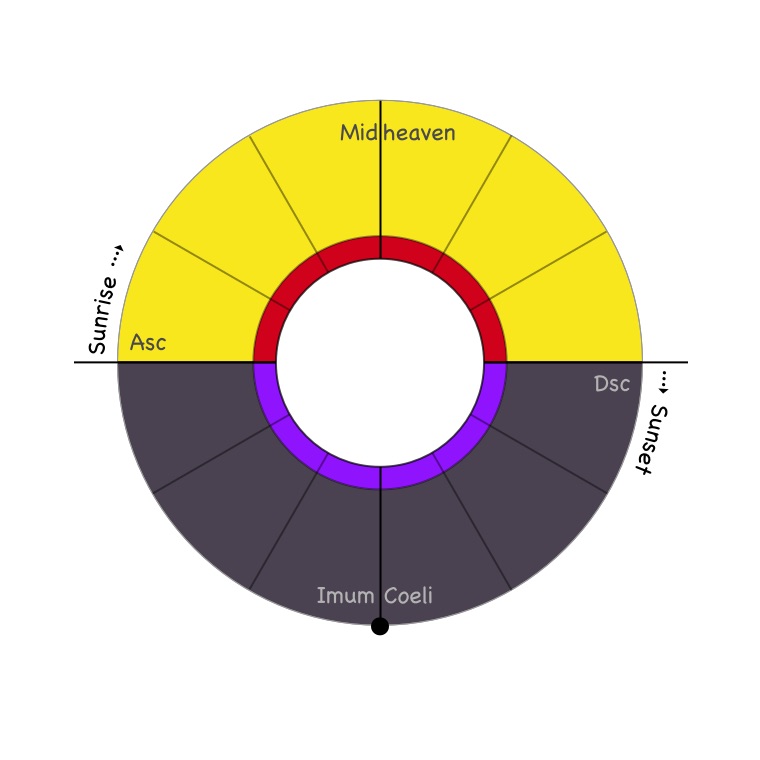 Day and night is the duality that defines the core building blocks in the construction of the wheel of the Western astrological chart.

Day and night is the duality we perhaps observe the most and it certainly has a solid set of correspondences in the foundational astrological knowledge — it is at the core of the wheel of the Western astrological chart.

Getting a better understanding of astrology often starts with noticing how opposing principles define the dynamism of the the configuration of celestial bodies of every chart. This facilitates the move from the oversimplifications like “good vs bad” to fluid understanding and deeper interpretation.

Day and Night or rather… Nychthemeron

The English language doesn’t have a word for the 24-hour cycle consisting of the two phases, namely light time and dark time. Many other languages do have a special word for that unit of time. The Greek word “nychthemeron” (literally meaning night-day) is often used to express the full cycle of day and night. It’s a funky word yet useful to keep in memory for those special occasions.

The diagram below illustrates the unfoldment of the day-night cycle which is the basis of the Western astrological chart. 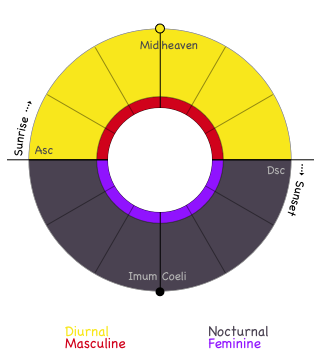 Action and rest, diurnal and nocturnal

The day and night phases describe not only presence or absence of light, they also symbolise action and rest. Time itself is divided into alternating phases with the day phase beneficial for action, the night phase — for internalisation.

This inherent dualism is being well expressed by the symbolism of the celestial bodies where each body is associated with either day or night modality, or even both at once.

The Sun is obviously diurnal. It is the source of all light, the life-giving principle of heat and therefore action.

The Moon doesn’t emanate any light by itself but reflects it. The Moon is a nocturnal luminary with its predisposition for rest and moisture.

Jupiter relates to the Sun and therefore it’s diurnal. Even at the physical level, Jupiter is considered to be a star in the making. Watched the film 2010: The Year We Make Contact ?

Venus relates to the Moon and is nocturnal.

It’s also worth remembering the gender principle allocated to the planets: The Sun and Jupiter are masculine; The Moon and Venus are feminine.

Mercury — being transgender (read post “Masculine, feminine and transgender in astrology”) — oscillates between diurnal and nocturnal states. It is considered diurnal when is above the earth when the Sun rises, and nocturnal when sets after the Sun.

A dilemma allocating Saturn and Mars

Using the principle of balancing the opposites, it could be suggested that coldness of Saturn should be used to counterbalance the heat of day. Therefore Saturn is considered to be of a diurnal quality.

Mars with its dryness opposes moisture of the night. Thus Mars is a nocturnal planet.

It is worth noting that this is the classical Ptolemy’s view. One may also argue that Mars stands for action and fits the day much better, and Saturn is mostly being depicted as an aged inhabitant of the twilight zone — which fits the image of the night rather well.

Using this alternative allocation would add “coldness” to “moist” of the night and “dryness” to “heat” of the day. Could it be that this would take the opposing forces out of balance? It’s an interesting question to ponder upon.

Putting it all together

Using Ptolemy’s view the summary may look like so:

The qualities of time and gender can also assigned to the zodiac signs.

Aries and opposing Libra cusps mark the northern and southern equinoxes (spring impulse in corresponding hemisphere) and thus considered to be diurnal and masculine.

Qualities of the rest of signs distributed in an alternating order.

Interestingly, Cancer and Capricorn are the solstice signs and are said to be nocturnal. Their cusps mark the peak duration of day after which the impulse of the night is emerging. 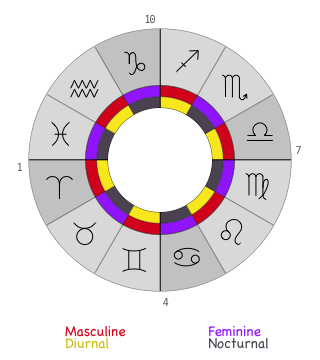 It’s not all set in stone

The allocation of dualities of day and night to the planets and the zodiac is an interesting way to classify celestial bodies and sectors of the sky. It makes a certain sense from the standpoint of balancing opposing forces, the hallmark of the universe. Yet there could be other valid models that make more sense under different circumstances. This is the beauty of astrology as a metaphysical discipline — it’s not all black and white!

Thanks for this article. It is edifying that you mention Libra and Aries representing the spring impulses in BOTH hemispheres. And that the Solstices mark the return of the impulse of night in BOTH hemispheres. Many Astrologers are ‘Temperate Zone Northern Hemisphere’ centric as I call it (even southern hemisphere Astrologers like Santos Bonacci) and ignore or dismiss other seasonal realities at the north pole, the equator and southern hemisphere. Such ignorance or dogmatic stances do not help in the quest to make Astrology a universal science.

I like how you say it’s not all set in stone. True science is empirical and adaptable to new discoveries, preserves relevant truths and does not throw out past findings, e.g. the truth that it is still spring at 0 degrees Aries in the northern hemisphere despite the discovery that it is the beginning of autumn in the southern hemisphere, does not invalidate Astrology as some claim it does. Having said that, if Tropical Astrology continues to correlate the seasons with signs then should the rulership and dignity of the planets in signs be changed for those born in the southern hemisphere, e.g. Mars rule Libra with Sun exalted therein ? Alternatively we could discontinue correlating the signs to seasons but rather correlate them to the ‘direction’ of the planets along the ecliptic, as Vic David Cara states? So, In its apparent annual path as seen from the whole planet, the sun rises due East at 0 degrees Aries, and is therefore exalted in that sign for the entire planet, reaches its most northern point at 0 degrees Cancer, sets due West at 0 degrees Libra and is at its most southern point at 0 degrees Capricorn. From anywhere on earth the sun doesn’t appear to move in the opposite direction annually, i.e. rise due East at 0 degrees Aries, culminate at 0 degrees Capricorn and set at 0 degrees Libra.

Perhaps, given the discovery by tropical astrologers that the northern hemisphere seasons are not universal, there was ancient unconscious wisdom in alternating the masculine/feminine and diurnal/nocturnal signs. If Scorpio to Pisces had been deemed nocturnal (reflecting darker days in northern hemisphere) as Rudolf Steiner designates them, for example, and Aries to Libra had been deemed diurnal (reflecting lighter days) then this Tropical model described above may not have been applicable in the southern hemisphere.

I would appreciate your thoughts on this.

Having lived in the northern and in the southern hemisphere for extended periods of time, I am acutely aware of the differences and seasonal variations. Hence my ongoing effort to see the picture from the both sides of the equator. The experiential aspect is also of a great importance to me, for example the night sky of the southern hemisphere feels very different from the northern hemisphere. The zodiac is the same yet the polar regions add certain hues that modulate it in unique ways. Can this be formalised? I don’t know.

In my personal view astrology deals with an archetypal symbolism, how things from above reflect down here. Thus when dealing with he zodiac one deals with a projection of core “pure” principles that aren’t necessarily linked to the season but rather to the notion of a cycle of changes. I think the Chinese principle of Wuxing that deals with the notion of “movement” is a great way to formalise cycles that can be cosmic, seasonal, health-, politics-, etc. related.

Another way is Plato’s theory of forms. The leads to the idea that each zodiacal sign corresponds to a specific archetype that exists independent of the Earth’s physics and optics. This could mean that it’s not the geography or timing defines qualities of the zodiac signs. It’s the “pure” signs that pass their true cosmic essence through the framework of the Earth’s reference point. This clearly causes certain variations and perceived inconsistencies… yet the nature of the signs is still the same, and will remain the same even on other planets of the solar system. Yet there will always location-dependent tinting.

The northern hemisphere had a geographic “privilege” that the cosmic principles less inconspicuous (and also slightly less tinted) so astrology was formalised there. Plus some 2,000 years ago the tropical zodiac and the constellations were aligned and that coincidence helped even further!