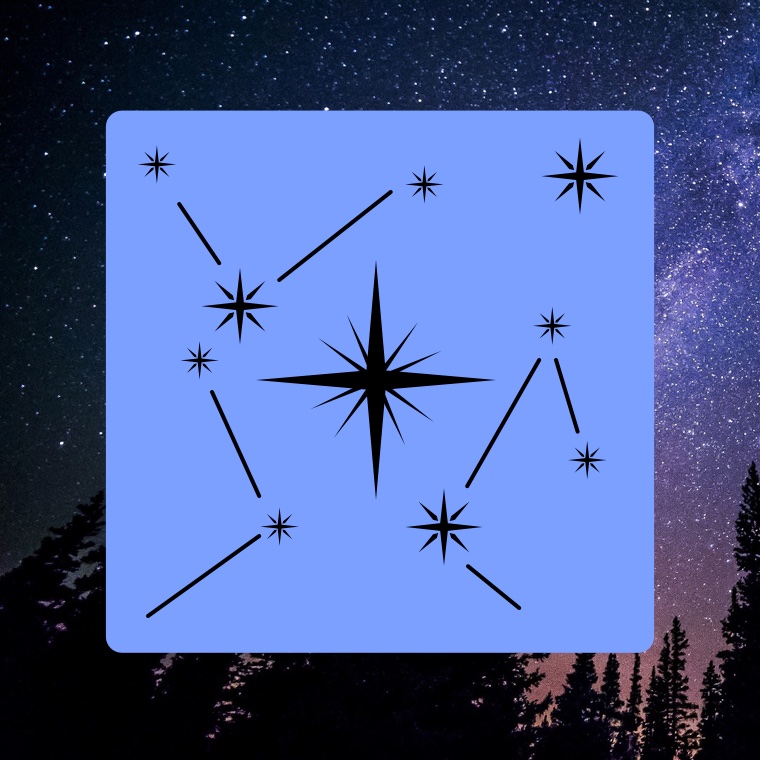 Fixed stars astrology adds an extra layer of precise information to your natal chart or any other astrological chart for specific time and place. Learn how to work with the fixed stars using Time Nomad — enrich your chart interpretations with very specific knowledge of stellar influences.

Time Nomad offers a “Fixed Stars” tool that was carefully designed to be a valuable calculator of the fixed stars zodiacal positions and their aspects with planets and points on any astrological chart.

The fixed stars calculations and interpretations bring a wealth of astrological insights that are of immense help to any practicing astrologer — from beginner to professional.

The fixed stars hold the key to precise chart interpretation

The point-like nature of the fixed stars allows for some very precise observations when it comes to working with natal charts.

Unlike the planets whose energies are of a more diluted and dispersed nature, the fixed stars express themselves via sharp and forceful astral energies that are always specific to the chart’s time and geographic location.

Analysing the fixed stars, the astrologer may uncover some previously unknown and unsuspected influences that were very difficult to explain just by working with the planets alone.

A fixed star can easily modify energetic profile of a planet in ways that could potentially confuse both the astrologer and their client:

“How come my Moon feels so fiery, against everything I’ve been told about watery nature of the Moon?”

To answer questions like that, the astrologer should analyse the position of the Moon relative to the fixed stars, and see if any stellar influences were at play. The energy of the Moon can be easily modified by its conjunction to stars like Regulus, Antares or Aldebaran — all of them are of fiery Mars-like nature… but each with a certain twist.

The fixed stars astrology recognises several categories of stars, each group has its own value and interpretation. Knowing to what category some specific star belongs allows for a more meaningful interpretation of its actions.

Those are the most powerful and influential fixed stars known since ancient times. The word “behenian” originates from Arabic bahman meaning “root”. The fifteen Behenian stars were extensively used in astrology and magical practices. Each of the stars is assigned some key properties:

Those fifteen stars are more or less evenly distributed along the zodiacal circle. The illustration below shows Time Nomad chart with Behenian stars placed along the Zodiac. 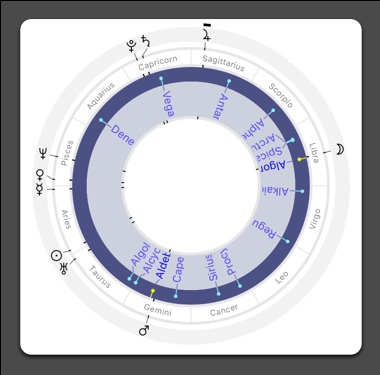 The table below lists fifteen Behenian stars and their properties.

Analysing aspects of Behenian stars is the first logical step when looking at any astrological chart.

The second type of fixed stars are not really “stars” but rather huge formations consisting of many stars. They are commonly known as Messier objects in modern astronomy.

Time Nomad supports several major Messier objects, the illustration below shows their positions on the Zodiac. 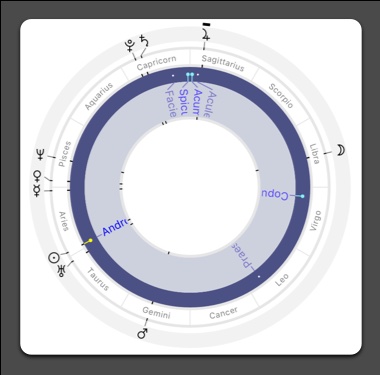 Ancient astrologers held a rather negative view about objects like nebulae, associating their quality of nebulosity with blindness and other physical defects. This is perhaps a somewhat outdated view. In the modern astrological parlance nebulosity can be translated into weak sight, lack of discernment and indecisiveness in general.

Other stars of significant influence

Time Nomad comes with about 85 other stars that are all proper physical stars qualities of those were been described by the ancient astrologers. Well known and influential stars like Achernar, Altair, Canopus, Castor, Pollux, Rigel, Betelgeuse belong to this category.

These stars are also very important for astrological analysis, especially when they rise above the horizon, about to set or culminate.

What stars are the most important?

A general rule is that a brighter the star that is close to the plane of ecliptic would have a very strong influence on any planet it aspects.

Aspects that the star forms with the planets or cardinal points of the chart is another indicator of its influence strength. And as with regular aspects between the planets, the smaller the orb of the aspect, the stronger that fixed star influence is.

What aspects can fixed stars have?

The fixed stars aspects is the topic of debates. The most accepted point of view that the stars can only form conjunctions because “stars cast no rays” as per traditional astrological point of view.

But from the standpoint of geometry, any aspect is possible. It’s a matter of personal preference and knowledge of working with the fixed star aspects.

Time Nomad allows to work with any aspects, both major and minor. The illustration below shows the app settings where the user can select stellar aspects they wish to calculate. 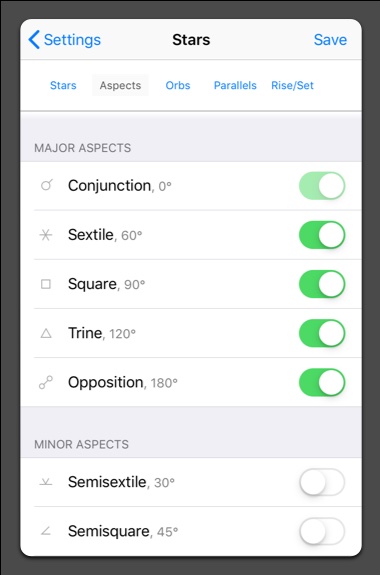 Viewing aspects to the fixed stars 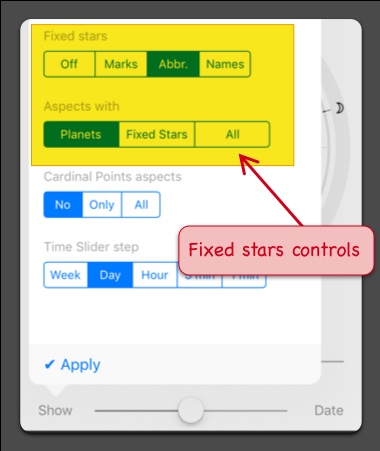 Once the stellar aspect turned on, their connecting lines will be displayed on the chart, just like regular aspects. 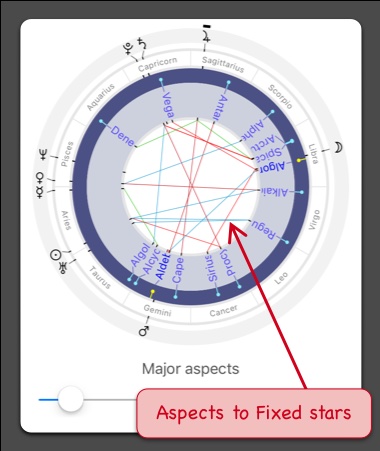 The wheel chart provides a good overview of the aspects but if you need to see the aspects in a list format, head over to “Fixed stars” or “Natal fixed stars” screens that provide a rich reporting functionality. 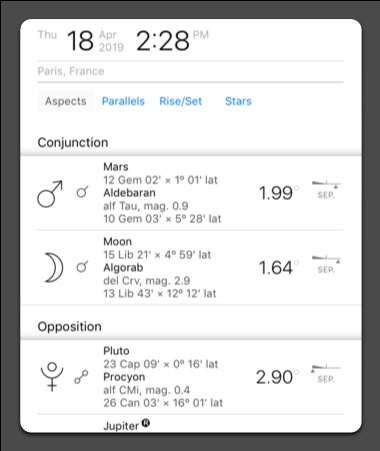 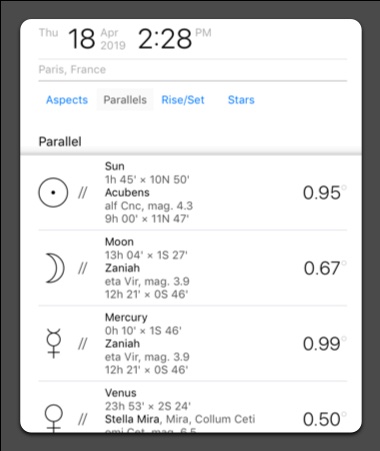 What makes a unique chart is its precise geographic location as well as time. Once astrologer knows those parameters, they can calculate positions of the fixed stars as seen from that specific place on the Earth.

The most important are those stars that are: 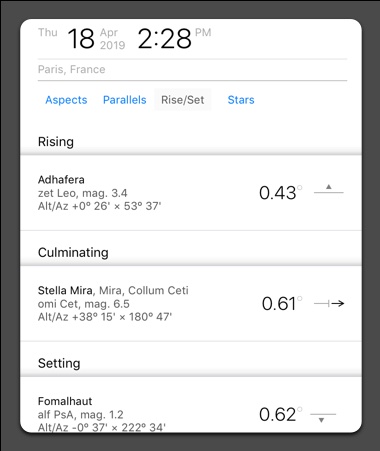 The most significant influence is attributed to rising and culminating stars. Setting stars give much more subtle and nuanced clues to their influence. Culminating star signifies maturation and maximum of unfoldment of its energies. Rising star brings a youthful punch and sets the dynamic direction for the chart.

Every listing — be it aspects, parallels, rise-culmination-set or general star informations — can be further filtered and customised by tapping on the “Show” button. 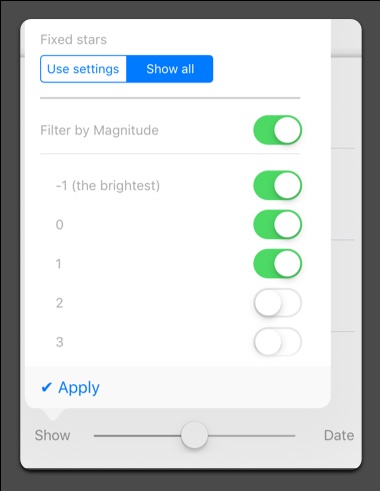 The popup menu allows to exclude or include stars by their magnitude as well as to choose if you want to work with the pre-selected set of stars (as per app settings) or the whole available list of the fixed stars. 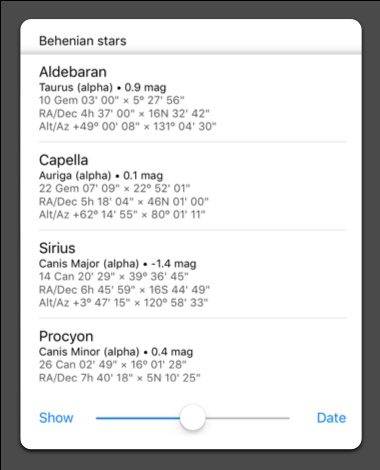 The filtering functionality helps to narrow down the search, for example, if only stars of certain magnitudes are of interest.

when I was born aldebaran uranus and sol lined up on nine gemini opposing alpha scorpius at 9 sagittarius but saturn conjunct Belteguese at 27 Gemini and 27 is another nine also Mars conjunct Pluto and looking at the chart you notice URANUS DOMINANT OCCULTATION SUN RISING but fixed stars t Aldebaran and Antares get into the mixture I do attract attention and have mental powers.

I was also a prenatal abductee my mother got her space trip while pregnant with me inside her this has developed a history an offer of a military posting with Reptilians.

This sounds fascinating in the light of all that is coning to light in the revealtions of space and alien contacts. I hope it augers well for you .