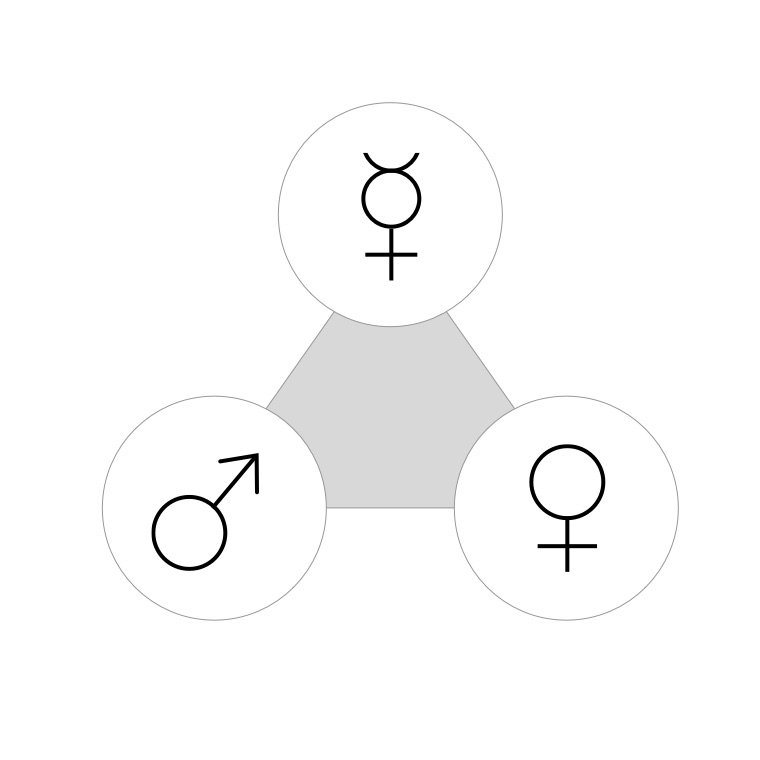 Astrological chart manifests itself through the planetary forces that can be classified according to the gender principles – masculine, feminine and oscillating transgender.

The existence of the universe is based on the constant interplay between the male and female principles. Duality is the hallmark of the creation that is shaped by the forces of action and attraction. Masculine and feminine categorisation is so ubiquitous that one may miss the third “sex” — neither masculine nor feminine but the androgynous principle. The modern age offers a broad range of sexual orientations — heterosexual, homosexual, bisexual, asexual, or even the lack sexual orientation! Transgender is the principle of actively transgressing “assigned” sexual category and has a tangible relationship with both Mercury and Pluto.

Hindu mythology provides us with a rich foundation for understanding and appreciation of the cosmic interplay of polarities. Classifying principles into male and female allows for an easier and yet deeper interpretation of an astrological chart.

Shakti is the female side of the creation in the Hindu tradition and is matched by Shiva — the male principle of consciousness. Shakti is periphery and malleability. Shiva is centrality and firmness. The Shiva/Shakti dialectic provides a fertile ground for the universe to maintain its continuous unfoldment.

Recognising the male/female duality in the forces that make up the astrological chart adds an extra dimension to understanding of the astral configuration.

Referring to the excellent classical work Tetrabiblos by Ptolemy, the planets are classified this way:

Mercury is an interesting case, it’s neither masculine nor feminine. Being the messenger of the gods, Mercury is the agent of exchange between the two genders. Mercury energy is ubiquitous, it connects and makes principles communicate.

One can see Mercury as androgynous being that represents both genders at once. Somehow this fits the image of Mercury really well — mostly portrayed as a youthful person with a subtle touch of gender ambiguity. The principle of Hermes/Mercury is at the core of alchemy which squarely aims at transformation. Generally speaking, a lot of human psychological and emotional malaise comes from misunderstanding of being out of touch with the opposite sex, both inwardly and outwardly. Somehow Mercury unites these opposing principles and brings harmony. Something of the future!

For a deeper look into the nature of Mercury and its mastery of rhythms and polarities read our story “Myths and truths behind Mercury retrogrades”.

Here it gets a bit more complicated. Uranus, Neptune, Pluto and other distant bodies are all relatively recent additions to our knowledge. Those bodies are not visible by the naked eye and therefore can’t be experienced directly through human senses, perhaps for the rest of the 21st century, at least. Those planets are way too far for the current state of space technology.

The trans-Saturnian bodies relate to the hidden side of our psyche. They are often described as a higher octave of certain classical planets:

What could this mean? Being very slowly moving planets, trans-Saturnian bodies represent trends at the societal level, changes that germinate totally unseen until finally arrived and manifested.

Among other things, Pluto relates to the base chakra, the seat of sexual “configuration” and the forces of core attraction. Pluto-Mercury duo provides a rich base for sexual oscillations — when one is in touch their Pluto-Mercury they can be anything, actively transgressing any traditional view of what is considered to be “normal”.

What about the stars?

According to Ptolemy, the fixed stars alternate their gender polarity depending on their position relative to the Sun.

Another way to say that: the stars that precede the Sun are masculine, the ones that follow are of feminine polarity.

Keeping up with the female side

Male is an active principle and generally much more understood. It’s simpler, more predictable in its actions, moves forward and pushes through boundaries.

Harnessing the mystery of sexes is one of the keys to transformation. Identifying and artfully “surfing” the gender polarities that are always present inside of human psyche and manifested through the planetary forces of an astrological chart is what can make a happier and fuller person.

I had thought that Neptune was the higher octave of Jupiter, since classically, Pisces and Sagittarius shared Jupiter. It would seem that the Sun and Moon, Moms and Pops, would not have an “octave,” but be primal in nature.

You’re right, my mistake about the Moon, how did I miss that! I’ve seen different versions in regards to Neptune. Sometimes Jupiter, other times Venus. They both makes sense in their own way.

Concerning octaves, Neptune has been said to be a higher octave of Venus. That’s consistent with Venus being exalted in Pisces. I would think there is a connection between the 9th and 12th Houses, of dreams, and the transcendental mind, and the meanings of life.

Wonderful read… The harmonics of the heavens! I postulate that the gender split should be equal?! Perhaps Jupiter is actually feminine, being the giver and expander… in opposition to Saturn and his taking and testing?!

A while ago a friend asked me if I could read a chart without knowing the gender of the individual. I told him that there were planets that dealt with certain “functionings” that made that irrelevant, such as the Moon’s relationship to the birth cycle. He was hung up with an ideology that said there should be no difference, therefore astrology was limited in its scope.

Back to Jupiter: It is exalted in Cancer! But with Saturn, Chronus to the Greeks, who was a destroyer, why should that negativity be the province of male principle, even though he castrate his father, Uranus - whose other name was Kaos (hmm…Saturn = order, castrated Kaos) I think that female and male principles should be applied to male and females alike, and nature will provide for equality and balance.

I wrote an article, Intersteller Solar/Lunad Dynamics, asking how should planets that have more than one Moon and at varying sizes be regarded. We have a unique relationship between our “Two Lights,” in that they are approximately the same size, creating a Yin-Yang balance in our nature. But what about planets where the Moons will be larger, and in some cases numerous. How would charts for individuals be done on those planets. We don’t have to go out of our solar system to observe that! My article: http://thenewtimesholler.com/ARCHIVE/inteluna.html

Reply to thread started by Jaye

This is so interesting, thanks for sharing

Your previous article called Mercury “androgynous”, which seems perfect. “Transgender” implies rejection of birth gender in favor of the opposite binary, not ambiguity. There is “pangender” for expression of all possibilities, “bi-gender” for switching between polarities, “neutrois” for indifference to polarities… But androgynous has infinitely more history and recognition than any of those.

Certainly agree with your point. The notions of transgender is somehow more relevant or better understood by the modern society, hence my choice to use it in the article. I have made some edits to bring extra fluidity to the gender definitions in the story, thank you for the feedback! An interesting observation of what is also being considered as “transgender” according Wikipedia:

Reply to thread started by LorenAmelang

Thank you for your article 🙏🏻

Hello, Could you please not address Emails to me as “Human?” It seems as if a robot wrote it!! A simple “Hello,” “Hi,” or even address me by name since you have it?

That’s not me answering the comment, it’s the comments software producing “dear human”. Anyway, I have tried to adjust the message to “Hi” as you suggested, fingers crossed it works.

Reply to thread started by Amir

I know what you mean. There is a lot of terminology involved, see my response to LorenAmelang (above) with a Wikipedia quote. Transgender is a kind of umbrella term these days. There can be many specifics, no doubt.

Reply to thread started by Priscilla