Mars–Neptune conjunction is one of those otherwise sleepy planetary energies that when finally awaken from their slumber and indecisiveness are guaranteed to turn heads and hearts. Most of the time Mars–Neptune isn’t doing anything. Having any significant Mars–Neptune aspect in person’s natal chart makes them rather lost and lacking direction.

But there are moments in time when Mars and Neptune talk to each in a way that is just like when hot sparks come in contact with a volume of otherwise cold and immobile pool of petroleum. Boom! The result is an unstoppable fire of a truly global proportion.

And that’s what has happened in America on around 26 May, 2020. A momentous ignition, a spark of stupid and blind police violence has shocked large masses of people out of their daily routine.

When “enough is enough” is overdue

Police murdering a black person followed by protests and accompanying riots is an ever-present sad feature of American life. There’s nothing really new, just recall all those years:

It appears there is a deeper underlying cause which periodically sends its tremors through the society. The American society experiences its symptoms while the root cause of the disease remains at a “subterranean” depth.

It seems that no matter how forward looking the American society strives to be, its underlying foundations have a great weakness, something that can be seen as a karmic debt that has to be repaid one way or another — there’s no other way around it since the law of karma expresses itself through its unavoidable returns: good deeds will bring more good, inflicted suffering will reflect itself back to those who initiated it.

The simple fact that a significant part of early American economic success rests on practice of slavery (aka crime against humanity) and unfair treatment of minorities still remains an unresolved fault line that is gradually developing into a multitude of cracks running across the foundations of the country.

Over hundreds of years the underlying division between “white” and “black”, “north” and “south” had morphed into the politics of “us” and “them”, “right” and “wrong”, “good guys” and “bad guys”. The underlying idea always remained the same: some are more right than others and thus should decide for everybody thanks to their supreme nature.

This fault line has never healed and indeed has very few chances to heal since the core political and economical model is forced on growth at all cost, grossly outdated, burdened with unpaid debt and patched with multiple band-aids of good intentions.

In short, the cost of slavery is the future lack of unity. And that lack of unity in the American society is what will bring the system down, at the right time when repayment of this karmic debt can’t be deferred any longer.

Time when Mars merges with Neptune

From the astrological perspective, time period of Mars–Neptune conjunction provides a time window when the energies of those otherwise incompatible planets can actually “talk” to each other.

Mars–Neptune conjunction happens approximately once in two years and lasts about a month, such time period is long enough to allow corresponding astral energies to produce an effect on human psyche.

What’s more interesting is that an event may happen shortly before the conjunction has formally begun, in such a way that it offers a context for unravelling.

American “Black Lives Matter” protests of 2020 began 26 May as a reaction to murder of George Floyd by police officers on 25 May 2020. 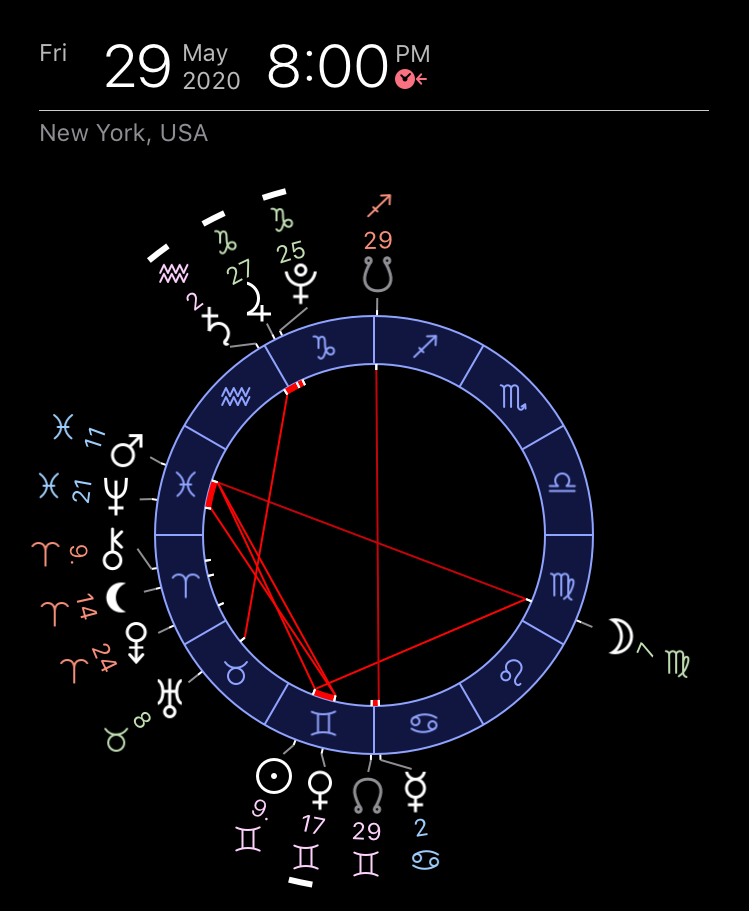 Mars–Neptune conjunction started in a few days’ time on 29 May 2020, reached its climax on 13 June followed by a gradual separation until 29 June.

The chart clearly showing other inflammatory influences, in particular: the Sun square to both Mars and Neptune, Uranus square to Saturn and the Moon in opposition to Mars–Neptune.

It is worth noting that Uranus–Saturn square carries a powerful symbolism of revolutionary trends actively confronting stagnated backwards-looking establishment.

It usually takes more than a single conjunction to trigger a significant event. Observing planetary positions in relationship to the fixed stars can provide additional clues as to why certain events happen at a particular moment in time.

The Sun is always a powerful translator of stellar astral energies and anything of magnitude does depend on its invigorating input. 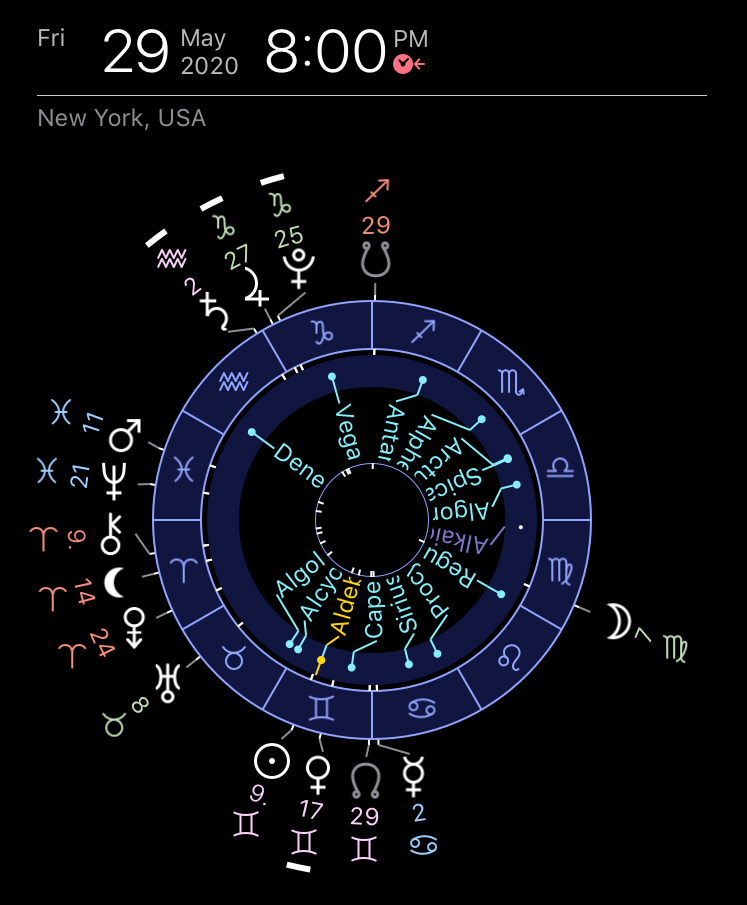 An additional pointer is the Sun on the fixed stars axis of Aldebaran–Antares during 27 May to 3 June. Both stars relate strongly to Mars. Sun–Aldebaran conjunction is often described as bringing danger from quarrels and the law. Combined with the Sun, Antares can express itself through malevolence, destructiveness and liberality.

If you’re interested to learn more about the fixed stars influence, head over to “Understanding the role of Fixed Stars in astrology”.

Protests are noble in their intention, they demand for respect of human dignity. Neptunian qualities of sympathy and sensitivity appeal to large masses of people in such a way that makes them collectively emotional and truth seeking. People are getting in sync with each other, mimicking how the ocean forms its huge waves full of unstoppable energy. Neptune always acts through mass and volume.

Mars — being the archetype of direction, fire and cutting action — becomes amplified by Neptunian movement and expresses itself through chaotic acts of civil disobedience and outright aggression towards those who hurt people in the first place (read “police and authority”).

Acts of looting and arson are genuine expressions of Martian energies under intoxication of Neptune. It is fascinating to observe that nearly all American protests involved looting and arson. And yet it makes total sense from the astrological perspective as people under intense Mars–Neptune influence express their anger by acting violently (Mars) yet chaotically (Neptune), effectively producing an ocean of fire.

It is futile to look for a specific “bad” mastermind (conspiracy theories about Antifa, etc.) as protests are messy, chaotic, disorganised and sporadic by the nature of forces involved. A degree of organised behaviour may appear later but not in the first days, it’s just not how crowds work.

To better understand any kind of protest — including the one that comes from one’s own partner — we should try to embrace the most unlikely union of idealism, chaos and hurt–anger reaction. While it may look like a grown-up’s tantrum at the first sight, there is depth and reality to it.

Historically the USA was shaped by the forces that lack “understanding” of Neptunian values and the principles of compassion and universality that it governs. It’s the blind spot that American political and economical system ever failed to understand.

Ultimately, what American protests are asking is the introduction of Neptunian values of sensitivity and sympathy and abandonment of brutality.

America understands Jupiter and it’s principle of expansion extremely well and that’s what made it so strong — an entrepreneurial spirit of a highest degree! Yet the problem with Jupiter is that it is easily goes out of bounds, becomes unchecked and forgets to care about details. Hence abandonment of sound economical and banking practices, financial gluttony and trumping over an average “Joe or Jane Citizen” with excessive force — all because “Growth” is the name of American God.

This surprising forgetfulness of human compassion and blind pursuit of shareholders’ profits is what enabled the slave–based society which America is still carrying strong imprints of and thus invites the necessity of karmic retribution which is likely to come from the domain of chaos ruled by Neptune — if not in 2020 then in near future — that’s unless some bright heads will emerge and steer the society away from the precipice and ultimate collapse.

The slavery still continues today. Too many people unable to make ends meet from low paying jobs. June 21/22 will mark a major turn in financial markets & a peak in Covid-19

Hence the “illusion” of Neptune when the slaves were “freed”…

Great article! It said in astrological ways many things I’ve been thinking about my country for a while now. Keep up the great work!

This was great! Thanks so much for writing this, good objective and spiritual perspective here.