The power of “invisibles” is amplified through the lens of this Full Moon. By the “invisibles” I mean both less obvious points and relationships within the astrological chart. I will get to that soon. Of all planets, the Moon is the swiftest celestial traveller – it covers the distance of a single Zodiac sign in mere 2.5 days. This speed gives the Moon its paradoxical duality – its fleeting nature that nevertheless perfectly capable of inducing significant emotional if not manic upheavals equally affecting the nature at large and each of us individually (even our cat always feels unsettled if the Full Moon is extra strong).

This Full Moon is marked by a stronger irrationality and a touch of madness. What makes it so? Through the power of minor aspects the Moon is directly connected to almost all planets with the exception of Uranus. Our gentle satellite pulls most of strings at once!

Most notably, the Moon forms a 135º sesquisquare with the mostly “invisible” trio cluster comprised of the Black Moon, Venus and Chiron. Sesquisquares are challenging, they bring up past unresolved conflicts pertinent to celestial entities involved. And here we go, the Black Moon and Chiron is a fitting duo for “hard to let go of” tendencies multiplied by wounds of the past. Another sesquisquare that is formed between the Moon and the South Node is likely to reveal karmic flashbacks exactly when we don’t want to be reminded of them.

The technical term for a double minor aspect is “spike”. The sesquisquare spike results in a square at its base, producing the famous “Thor’s hammer” which is the modern name for this punctual and acute outburst of astral energies. Head over to my article “Aspect patterns — the building blocks of astrological charts” if you want to learn about aspects patterns and their influences.

This Full Moon is a case in point! Just look at the recent mass shooting in a Thailand mall: as they say the offender “went mad” likely due to issues that have arisen from selling his property. I don’t think the guy truly went mad, he still acted as a trained pro hence the scale of the outcome simply unthinkable for an amateur. It’s more likely that his unresolved past caught up with him and bursted out at the moment of the Full Moon.

But we have Venus helping us, don’t we? Hmm… probably not this time though. Scroll down to the Venus–Mars in the context of the current chart.

When too much happens,
Denis 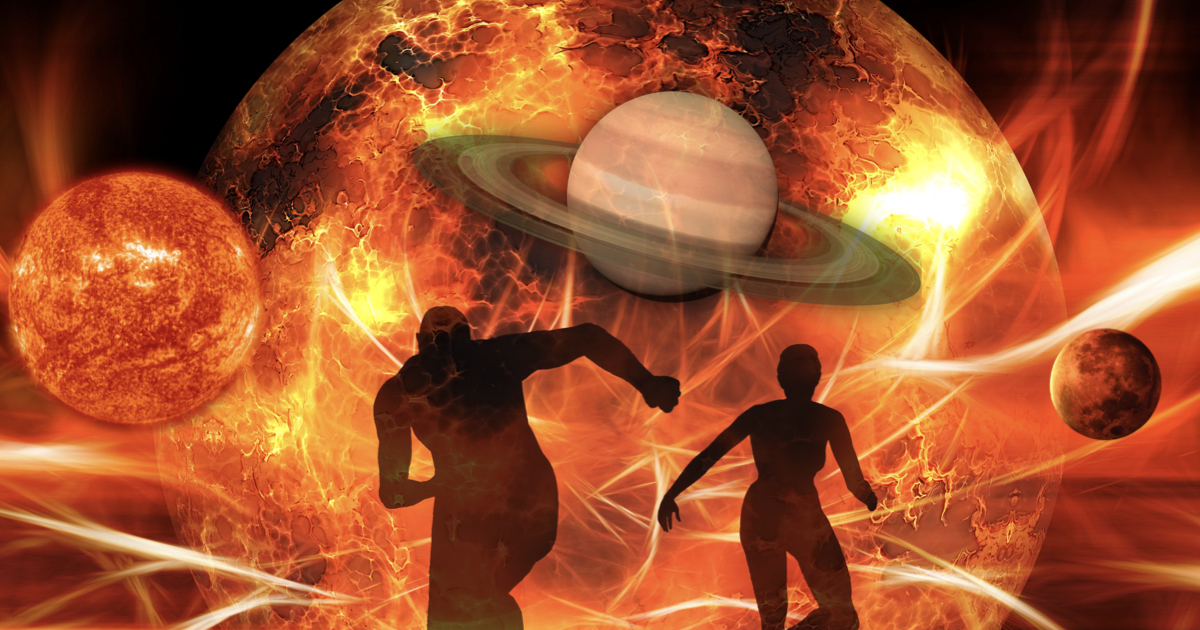 Do you have big plans for 2020? Or maybe your grand plan is to actually “stop and smell the roses”? Whatever your intentions are you have to connect to your inner resources by forming powerful alliances that will help facilitate your manifesting process.

All manifestations come in cycles that are defined by starting and ending points. The great and practical example would be the Moon cycle that lasts 29.5 days. Being a relatively short cycle it’s well suited for planning and execution of concrete short-term projects.

It’s always a good idea to synchronise your rhythms with natural cycles – that’s how you accelerate manifestation of your intentions. The Moon’s energy is great for setting the framework of the cycle – setting your goals at New Moon and reaching its peak potential at Full Moon. Yet to actually manifest things in the physical world we need a good amount of help from the so-called “structured” planets like the Sun, Mars and Saturn.

Gemstones and metals can become your mighty connectors to these potent planetary forces. Some minerals anchor Sun, Mars and Saturn archetypes better than others. All these crystals and metals have one thing in common – their energies are of Projective nature (revisit the article about Projective and Receptive gemstones). Projective gemstones bring momentum to your action, help to overcome inertia and engage your conscious mind.

These planets and related gemstones are the best facilitators of your manifesting power:

Rutilated Quartz is a perfect crystal that exhibits the Sun–Mars dialectic: the power of active self-manifestation through personal will and action. Click here to read more about the Rutilated Quartz…

The gemstone power is waiting. The rest is up to you…

You may also like to revisit the articles about Crystals and Full Moon and Celestial Dialectics: Sun–Moon & Gold–Silver

When Venus and Mars are ready for war

We often think of Venus and Mars as ever attracted perfect carriers of passion. Indeed, love and romance are more often than not orchestrated by this pair of libido-inducing energies.

Yet it would be a mistake to envisage Venus as a cute blonde wrapped in pink. It certainly knows how to express itself that way, especially when helped by the Moon or Neptune.

The true Venus archetype matches its planetary nature. Planet Venus is an extremely hot, highly pressurised ball that spins in the opposite direction of all other planets covered by a super dense atmosphere rich in sulphur, thunder and lightning. In other words, Venus can also express itself as another side of violence. Mars is hot and ruthless, Venus is boiling and never forgives. When joined together by a “hard” aspect they can form a perfectly malefic combination.

The current chart has that negative side of Venus–Mars square where Venusian negative tendencies are being reinforced by the hidden nature of the Black Moon multiplied by old wounds of Chiron. Simply add Mars–Uranus trine into the mix!

I have them Conjunct Leo 7th. And my bestie has it squared V. Pisces & M. Sag and then her partner has it V. Leo sq M. Gemini —— and my boyfriend is born 10 days after me. Same Conjunction. I ask because I have been trying to research those two planets, in relationships and in relationship to Pluto Libra generation

Venus–Mars aspects manifest themselves differently depending on at least three factors: aspect, house and sign (in this order of strength). Conjunction produces stronger more uniform libido and creative potential, supported by their Leo position; the 7th house speaks “relationships and partnerships” – I see this as a favourable layout provided no other planets introduce malefic influences via their aspects (ie, check Pluto and Saturn).

I’ve often seen that people with Venus–Mars aspects tend to be attracted to each other, and it makes sense since both planets give an affinity to passion and creativity.

Yet it’s important to observe that Venus–Mars is not a uniform “profile” — it can manifest rather differently depending on their location and “season” of life. Situation changes and person changes, their energy adapts to the reality.

Reply to thread started by Rachel