Now and the future

Coronavirus as the “can opener”

Obviously we need to talk about coronavirus and stocks and oil prices and how the world is turning into a crazier place than it was just a few months ago. For a trained astrologer it’s a case study of long term trends that happen to be culminating not unlike an ocean wave that swells and reaches higher and higher up. Those who surf in ocean know how to read waves, so should we, astrology enthusiasts.

Forget recent Mercury retrograde, it’s not an astrologically heavyweight planet even though it can throw a spanner or two into the well oiled machinery of human interactions — those events are of a local nature mostly impacting businesses and personal relationships.

Twitter is full of attention to the movements of the Moon. And rightfully so, the Moon rules over fleeting emotions as well as fast reproducing rabbits. It travels swiftly and touches us through the layers of feeling and emotional response. Moon’s influence is of a short lived nature, just look at the recent stock crash, the things went “back to normal” for a day, then started going down again, and so on… That’s a typical Moon infused behaviour of crowds since stock buying and selling is so emotionally driven. Stuff like that doesn’t always coincide with Moon phases except for when things are already somewhat out of whack due to more serious influences.

Let’s go through some…

Saturn–Pluto conjunction is a “broad brush” event with influence spanning the years 2019, 2020 and a bit of 2021. The gravity centre is on 2020, the year hosts two extremums that fall on January, 12 and October, 4 with retrograde phases of both Saturn and Pluto in between. This is a dense period of time and the world is waking up to the new realities where it’s the Nature itself that challenges human structure and societal resilience.

The Full Moon of March, 9 pretty much coincided with so much underreported Sun–Neptune conjunction. I was surprised that this event went rather unnoticed. One of the driving forces behind coronavirus is Neptune that is apart from all its lofty qualities is also the planet that rules over pollution and dissolution of boundaries, as viral as it gets! The spike of Corvid-19 cases in Italy pretty much illustrates the point. We can intuit that Full Moon during Sun–Neptune results in certain health problems that have to do with the lack of boundaries and coronavirus is the prime suspect!

Next influence is another “missed” aspect of conjunction between the Black Moon and Chiron that peaked on March, 3 but will continue to project its energy until July, 18. Mythologically speaking, Chiron is the healer of deep wounds and being aligned with the Black Moon can be seen as a force that opens up the wounds so that they can be healed. Chiron–Black Moon conjunction is also square to the Nodes, meaning that we have to deal with the wounds that tamper our past–to–future passage, aka the karmic debt.

Next… a much faster aspect is Venus–Uranus conjunction that takes place between February, 28 and March, 18 with exact moment falling on March, 8. It makes a symbolic sense to see unlucky Uranian influence striking Italy during that time since Italy is closely linked to Venus in terms of planetary energies. 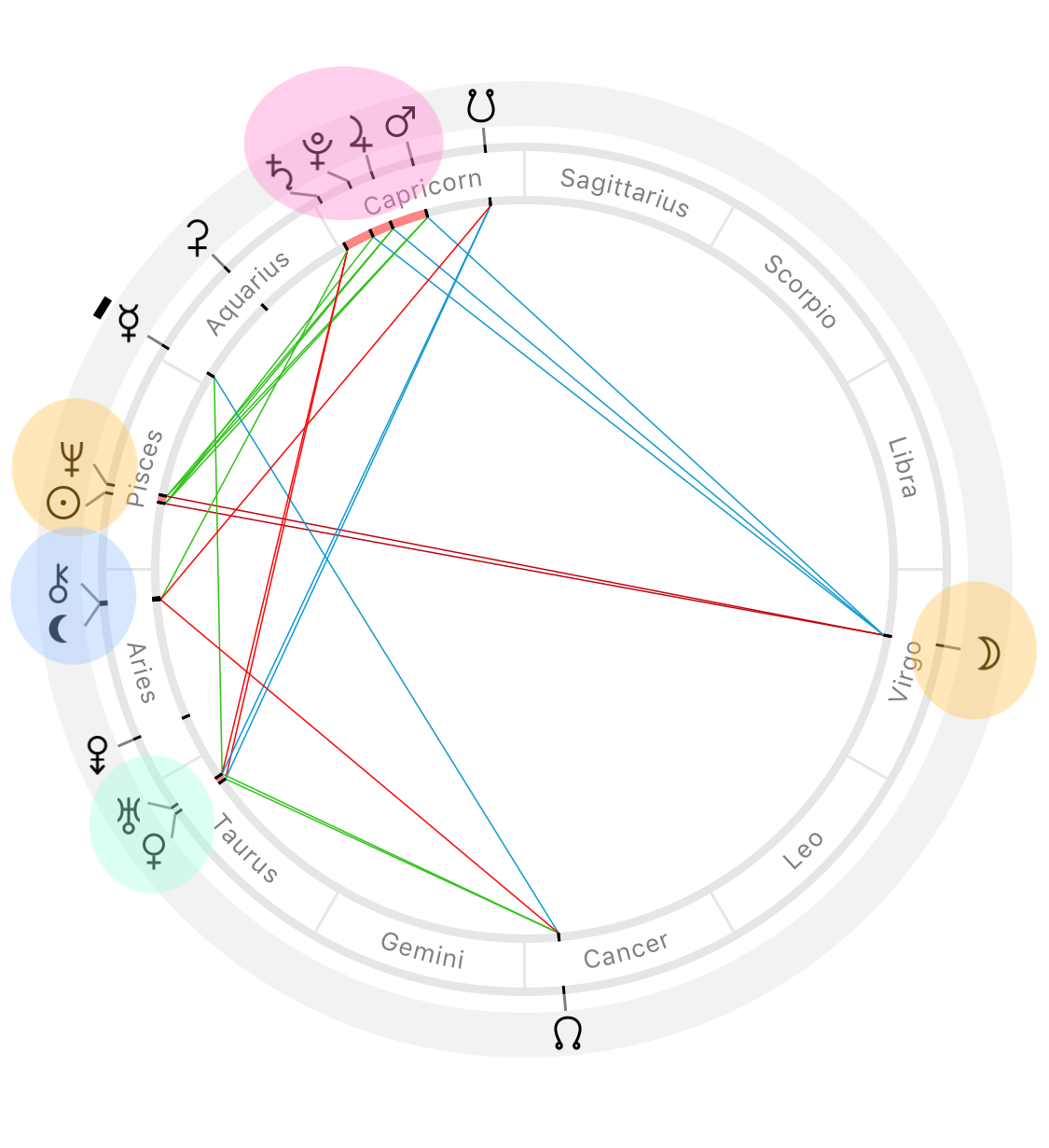 The upcoming Vernal Equinox on March, 19 further highlights healing as the problem that the world needs to focus on. At the equinox the Sun joins Chiron and Black Moon, all square to the Nodes, setting the course for the whole next astrological and astronomical year: humanity should focus on its physical health, improve its relationship with the Nature and tend to the world’s unhealthy financial and societal structures.

Denis is an astro nerd and a developer of your favourite Time Nomad app. ❤️ Follow his thoughts and ideas on Twitter.

Howlite — the gemstone of Purity, Unity and Harmony 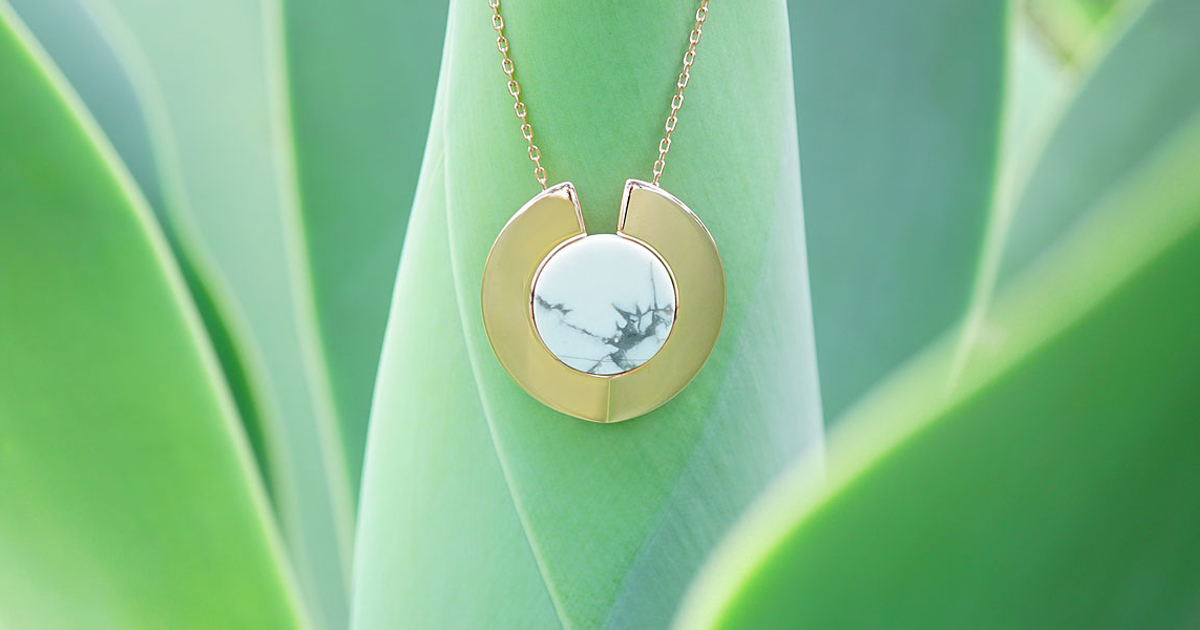 In nature white colour in its pure form is very rare among gemstones. Actually opaque white doesn’t exist at all with only one exception…

This exception is Howlite — a semi precious gemstone of white colour with veins of other minerals running through it. Someone may say it’s reminiscent of white marble — however marble is not used in jewellery, so we will leave it aside for now.

We love Howlite for its graceful elegance and purifying simplicity. Howlite is associated with Crown chakra (mind and thoughts) and known for its ability to calm overactive mind and release stresses of all kinds. Well, honestly who doesn’t need it these days? Howlite is like a quintessence from “celestial highness”, a touch of angelic presence if you wish. Astrologically speaking, it doesn’t correspond to any particular planetary energy — it rather unites all the planetary energies in one celestial principle and connects us to purity and harmony.

Yes! This was spot on with my observations. Liking the new dark mode. App still working flawlessly for me.

I called that cluster of Pluto, Saturn, Mars, and Pluto the fourhoursemen because I saw it in a dream. I think this will pass for sure, but definitely is a wake up call to the world to get their priorities straight before nature gets metal.

Phew, good to hear the new version works on your device! Still some bugs remain to iron out but I’m getting there. It’s been a big rewrite.

“The four horsemen” is a great way to describe the rolling thunder that is currently above our heads. Time to listen.

Praise the Lord for you ….it’s wet but you’re shining ..

Ok you have my full attention on the four horsey dudes…….

Reply to thread started by jkaig

The new colors of the app are a really nice touch. Thanks so much for all the work and effort you put into this app. This is a great tool for those interested in learning about astrology.

I am astonished at how much your app does! I learned how to cast a chart, using an ephemeris & log tables, in 1968. Your app does more than I ever could, Brian. And it replaces my (now discontinued) astrology software, on my Mac. I’ve upgraded everything but the added minor planets/asteroids. Keep up the excellent work.

Great newsletter brother. Just wanted to mention, The Sun is transiting Eris near Zero Point Aries. Just about done, couple more days. This is a major reason we are seeing the “Cleanse” which is the etymology of “virus”. Top scientists around the world are coming out in droves stating that what the tests are measuring is toxins leaving the cell not a virus attacking the cell. So it is very clear to me, predicting this even last fall, that this is a vibratory cleanse. I’ve even gone so far as to show that Eris was transiting into Pisces while Pluto was transiting into Aries during the Black Death of 1344-1348. Of course, one would have to use sidereal to see this happening and use the well worth the small amount to add the luminaries to your app. Ie Eris, Ceres, Hygiea (goddess of cleanses, needed to see when your cleanse will come), pallas, Juno (god of the heavens who is overseeing the current anna-peranna we are in), Chiron, etc. Thanks so much bro. Without your app, this would not have been possible. Peace, Love and Cheers!

I always love your brilliant app!!